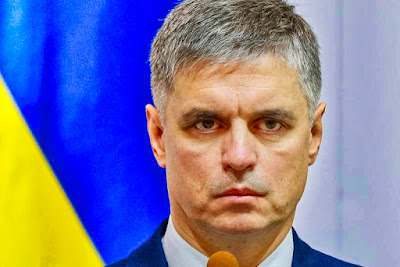 A breakthrough at talks between Moscow and Kyiv on Oct. 1 appeared to open the way for the leaders of Ukraine, Russia, Germany and France to hold the first four-way summit on the conflict in three years.

Since then the Kremlin has blamed Kyiv for a lack of further progress, but Prystaiko said Ukraine had almost met all the preconditions for convening the summit and that Kyiv, Paris and Berlin were ready to meet in the so-called "Normandy Format"..

"We create all of the necessary conditions ... Everything depends on the Russian side," he told reporters in Kyiv.

The Ukrainian military and Russian-backed separatist forces began a phased troop withdrawal in the eastern Ukrainian town of Zolote this week, part of a series of measures to end a conflict that has killed more than 14,000 people.

Prystaiko said Ukraine would also withdraw troops from another eastern town, Petrivske, provided there were no ceasefire violations for seven days in the area.

"Continuing shelling (in Petrivske), unfortunately, indicates that one of the parties does not want this progress, because this is the last step before the meeting," Prystaiko said, adding that the last shelling was on Wednesday.

Western leaders have urged Russia to use its influence on the separatists in east Ukraine to stop the violence.

Relations between Ukraine and Russia deteriorated in 2014 after a pro-Moscow president was toppled following street protests in Ukraine, Russia annexed the Crimea peninsula from Ukraine and Moscow backed the separatists in eastern Ukraine.