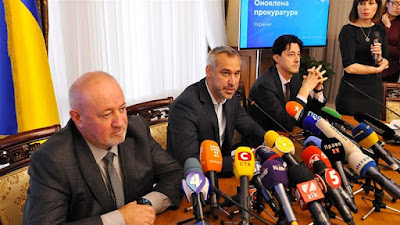 Ukraine's prosecutor-general Ruslan Ryaboshapka speaks to reporters during a news conference in Kyiv.

Ukraine's prosecutor-general said on Friday that his office is reviewing several cases related to the owner of a gas company where former Vice President Joe Biden's son sat on the board, as part of a review of all the criminal cases closed by his predecessors.

US President Donald Trump had pressed for such a review in a phone call with Ukrainian President Volodymyr Zelensky, a "favour" that has now led the US Congress to begin an impeachment inquiry.

Prosecutor-General Ruslan Ryaboshapka told reporters his office would revisit about 15 cases, but stressed that they were not necessarily connected to Biden's son, Hunter, who was hired by the oil company, Burisma, in 2014 at the same time his father was leading the Obama administration's diplomatic dealings in Kyiv.

Though the timing of Hunter Biden's hiring raised concerns among anti-corruption advocates, there has been no evidence of wrongdoing by either the former vice president or his son.

"We are conducting an audit of the cases that were earlier overseen by the Prosecutor-General's Office," said Ryaboshapka, who was appointed in August.

"We are reviewing all cases that were closed or broken up into separate cases, to make a decision on whether this was illegal."

Ukrainian authorities have previously said the investigation into Burisma focuses on a period before Hunter Biden joined the company's board.

Ryaboshapka also suggested the prosecutors may focus not on Hunter Biden but on Burisma's founder Mykola Zlochevsky and other figures.

"As far as we can see, this is more a question of Zlochevsky and [Ukrainian businessman Sergei] Kurchenko than Burisma and Biden," he said.

Ryaboshapka said he was not aware of any evidence of wrongdoing by Hunter Biden.

Burisma says it is the largest private producer of natural gas and one of Ukraine's leading gas groups.

Ryaboshapka's announcement came a day after US House investigators released a cache of text messages provided by Kurt Volker, the former special US envoy to Ukraine who stepped down amid the Democrats' impeachment inquiry.

Volker in the messages encouraged Zelensky's aide to conduct an investigation linked to Biden's family in return for a high-profile visit to Washington, DC, with President Donald Trump.

Ryaboshapka was mentioned in the July 25 call between Trump and Zelensky, who assured Trump that Ryaboshapka was "his man" and that he would resume investigations into Burisma.

The prosecutor-general insisted on Friday that he did not feel any pressure over the Burisma case.

"Not a single foreign or Ukrainian official or politician has called me or tried to influence my decisions regarding specific criminal cases," he said.

Trump has maintained he has done nothing wrong and has described the impeachment inquiry as "crap".

The US president on Thursday again invited foreign interference in a US presidential election by publicly calling on China to investigate Joe Biden despite there being no evidence of wrongdoing.

Democrats called Trump's remarks a "fundamental breach of his oath of office".