October 07, 2019
WASHINGTON, DC -- Sen. Ron Johnson “winced” when he heard that Ukraine aid was being tied to investigating the Bidens. 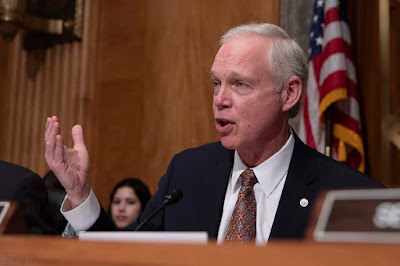 But like other Republicans, he didn’t bring any further political pain to President Donald Trump on Sunday, instead opting to use a morning TV appearance to defend Trump.

The Wisconsin Republican went full bore into litigating the 2016 election rather than discussing Trump’s current predicament, which is now the subject of the House’s impeachment inquiry.

And he said the point of his Wall Street Journal interview last week in which he divulged his conversations with the president about Ukraine aid and a Biden probe was meant to clear Trump, not hurt him.

“Here’s the salient point of why I came forward: When I asked the president about that, he completely denied it. He adamantly denied it. He vehemently, angrily denied it. So that is the piece of the puzzle I’m here to report today,” Johnson told NBC’s Chuck Todd on Sunday in a contentious interview.

“Unlike the narrative of the press that President Trump wants to dig up dirt on his 2020, what he wants is an accounting of what happened in 2016.”

Johnson told The Wall Street Journal that U.S. Ambassador to the European Union Gordon Sondland had told him about a trade of roughly $400 million in aid to Ukraine in exchange for a probe into U.S. elections.

Concerned about linking the two, Johnson called Trump directly and Trump refuted it, according to Johnson’s accounts.

Johnson is something of a wild card among Senate Republicans with little allegiance to party leaders after his 2016 campaign was left for dead by top Republicans; he was still reelected by nearly 5 points.

But when it comes to the deepening impeachment inquiry into Trump, Johnson is instructive.

And as everyone in Washington puzzled over his admission about his own part in Trump’s Ukraine saga, Johnson went on “Meet the Press” to make clear he’s not joining the small band of Trump’s GOP critics.

“I’m pretty sympathetic with what the president has gone through. I have never seen in my lifetime, a president after being elected, not having some measure of well wishes from his opponents,” Johnson said of Trump, citing the adversarial press coverage of Trump.

Johnson in early September traveled to Ukraine with Sen. Chris Murphy (D-Conn.), who followed Johnson on “Meet the Press.”

Murphy said they are friends but he is “deeply scared” by Johnson’s stance on Sunday.

“That interview was just a giant green light to the president of the United States to continue to solicit foreign interference in U.S. elections,” Murphy said.

“This entire country should be scared, that at a moment when we need patriots, what we are getting is blind partisan loyalty.”

The Connecticut senator concluded of Republicans: “They shouldn’t be fearful of this president. If they vote to get rid of him, there’s nothing he can do to hurt them.”

But in the meantime, Trump is making clear he’s watching every public utterance of Republicans closely.

Senate Majority Leader Mitch McConnell (R-Ky.) asserted that even if Trump is impeached by the House, he'll likely be safe in the Senate, which would be responsible for holding a trial if the House votes to impeach.

“The way that impeachment stops is with a Senate majority with me as majority leader,” McConnell said in a video fundraising solicitation for his 2020 reelection campaign.

“But I need your help. Please contribute before the deadline.”

Twenty-one years ago, McConnell said he would not “prejudge” the impeachment case against President Bill Clinton in the Senate since as a senator, he was a potential juror.

Republicans on the Sunday shows did little to break with the president, calling Trump’s call for China to probe Vice President Joe Biden a joke and dismissing news that there’s a second whistleblower.

Politically, it was easy to see why: Trump spent Saturday attacking Mitt Romney (R-Utah), one of three Senate Republicans who expressed concerns about Trump’s invitation last week for China to investigate Biden.

Romney described Trump’s actions as a “brazen and unprecedented appeal to China and to Ukraine to investigate Joe Biden is wrong and appalling”; Trump retorted that Romney is an “ass” and suggested he should be impeached.

“The media loves for Republicans to criticize each other,” said Rep. Chris Stewart (R-Utah), who declined to defend Romney.

Not every elected Republican is defending Trump.

Aside from Romney, Sens. Ben Sasse of Nebraska and Susan Collins of Maine raised questions about Trump’s most recent public statement that China and Ukraine should probe Biden.

But other than that handful of Republicans, dissenting voices were absent Sunday, where even former Rep. Mark Sanford (R-S.C.), who is also challenging Trump, declined to endorse Trump’s impeachment and declined to commit to voting against him.

“You really think he was serious about thinking that China’s going to investigate the Biden family?” said Rep. Jim Jordan (R-Ohio) on ABC’s “This Week."

Some Republicans also brushed aside the existence of a second whistleblower who has reportedly verified Trump’s dealing with Ukraine.

Stewart said the White House’s release of a summary of Trump’s call with the Ukrainian president was far more salient than a pair of whistleblowers concerned with Trump’s conduct.

“It does not matter,” Stewart said.

“We have this transcript. Why should I care at all?”

For the most part, despite the GOP’s dismissals of new questions and revelations about Trump and his aides’ conduct with foreign leaders, the Sunday show appearances were relatively civil despite, for example, Jordan’s stonewalling of questions about whether Trump’s calls for foreign election interference are appropriate.

The same could be hardly be said of Todd and Johnson.

“You set this thing up totally biased,” Johnson said of his interview.

“I would never be able to get the truth out … something pretty fishy happened during the 2016 campaign and during the transition and the early part of the Trump presidency.”

“I’m sorry that you chose to come on this way, senator,” Todd responded.