August 02, 2019
KYIV, Ukraine -- The newsflash on Thursday evening seemed to suggest that Volodymyr Zelensky’s glorious honeymoon was coming to an end. 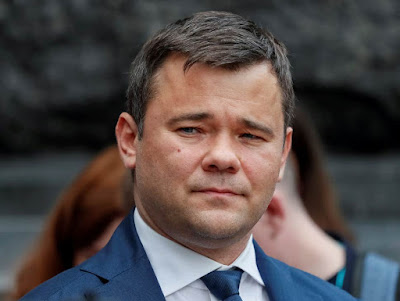 Andriy Bohdan, all-powerful head of the Zelensky administration, the man seen whispering in his ear at any moment, had resigned.

Kyiv's political class was on edge, awaiting the details of the scandal that had inevitably caused the powerful lawyer’s downfall.

Sources within the presidential office confirmed it.

The respected news wire Interfax-Ukraine published it, making made it a matter of record.

There was a resignation letter, written in Mr Bohdan’s own hand, asking the president to accept his “voluntary exit from the moment of choosing.”

Only a few hours later, it transpired Mr Bohdan had not, in fact, resigned.

Dmytro Razumkov, another of Zelensky’s core team, and tipped to become Ukraine’s next speaker, raised eyebrows by claiming he had “first heard about the news from the media.”

Then, other members of Mr Zelensky’s high circle briefed journalists off-the-record that Mr Bohdan had been playing a prank.

For many hours, Mr Zelensky’s own office refused to officially confirm or deny the resignation.

It was only shortly after lunchtime on Friday that the new administration decided to put a line under the story.

Mr Bohdan had written the letter, it said, but Mr Zelensky had not accepted it.

Besides, the press release claimed, the president had such letters from all his staff.

That was the deal, the statement remarkably claimed: “If society or the president will start to feel that any individual isn’t coping with the tasks, then at any moment this person can be fired.”

Mr Bohdan later claimed his letter may have been leaked by malign elements in the security services.

By that point, the Ukrainian journalists who published the news were furious.

The investigative reporter Kristina Berdinskykh, who says she received the resignation letter directly from the president’s office, described the story as “post-truth in its clearest form”

“I would never have published the letter if I didn’t receive it from an official,” she said.

“There is nothing good to say here. It’s about trolling traditional media and misleading voters. It is a demonstration that you can’t believe anything unless it has been written on the presidential Instagram.”

Others suggested that now even the presidential Instagram could not be considered the last word.

Timothy Ash, an investment strategist, took to Twitter to describe the development as “idiotic.”

“This looks really bad and unprofessional,“ he wrote.

“If it is not true the presidential administration should have come out straight away with a and clear denial. Not leave everyone waiting for over 12 hours.”

Mr Bohdan has attracted controversy almost from the first second of his appointment on 21 May.

An ambitious risk-taker who rose to influence as a lawyer for the controversial oligarch Ihor Kolomoisky, many contended Mr Bohdan had no right even hold government office.

As a former member of the Yanukovych administration, he falls under lustration laws that forbid government service for 10 years.

That would seemingly bar Mr Bohdan until 2024. Mr Zelensky’s team explained the anomaly by claiming the law did not extend to the presidential office.

On Saturday, a petition calling for his removal reached 25,000 signatures – a level requiring an official presidential response that is still forthcoming.

Thursday’s apparent prank was likely a response to the campaign against him.

But the chances of the advisor being pushed out in the near future are slim. Mr Bohdan, after all, is one of the key columns on which the Zelensky administration is built, says the commentator Valery Kalnysh.

“Bohdan is the only one in the team who understands how the system works,” Mr Kalnysh told The Independent.

“He knows the mechanisms of co-ordinating ministries, parliament and the presidential office. He’s made it his business to be loyal and critical for the operation.”

The "resignation" is likely to increase tensions between journalists and Mr Zelenksy’s office, which has made little secret of its disdain for traditional media.

“In Viktor Yanukovych’s presidency, they called journalists who criticised the president agents of the West. With Petro Poroshenko we became agents of Russia. And we’ll get through this new virtual reality too.”

But one party set to benefit is Russia and its associated media.

The Kremlin has had difficulty characterising the Zelensky phenomenon for Russian audiences.

The former comedian is well known and well-liked in Russia and has made several appeals – in Russian – over the heads of the Kremlin.

Marginalising the new president as anti-Russian is problematic.

The talking point so far has been that Mr Zelensky is a “nice guy,” but a joker out of his depth, manipulated by those around him.

Mr Zelensky was “a good actor,” he said.

“But it’s one thing to act someone, another to actually be someone.”

After the machinations around Mr Bohdan's "resignation," dismissing such a characterisation became difficult.

I. Nicholas said…
This man is an idiot and should be fired for his stupidity. His so called "prank" played right into Russia's hands.
11:23 AM