August 08, 2019
KYIV, Ukraine -- Ukrainian president Volodymyr Zelenskiy has called for urgent talks with the leaders of Russia, Germany and France to try to end the five-year war in eastern Ukraine, after shelling by Moscow-led separatists killed four of Kyiv’s soldiers. 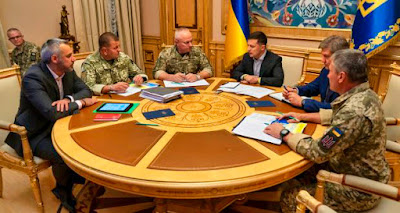 Ukrainian president Volodymyr Zelenskiy at an emergency military meeting in Kyiv: seeking an end to the five-year war in eastern Ukraine.

“I called him immediately and said this does not bring us closer to peace. I urged him to influence the [separatist] side so that it stops killing our people,” Mr Zelenskiy said of his phone conversation with Russian president Vladimir Putin on Wednesday.

“It is necessary to meet with the leaders of the ‘Normandy four’ as soon as possible. To look into each other’s eyes and to end this war,” he declared, referring to the halting four-way dialogue over a conflict that has claimed more than 13,000 lives.

Mr Zelenskiy, a former comedian who became president in May and saw his party dominate parliamentary elections last month, said he planned to speak to French president Emmanuel Macron on Wednesday or Thursday about possible talks.

“I also want to contact [German chancellor Angela] Merkel shortly and arrange an urgent meeting, so that we no longer [just] say to each other that there should be a meeting in the Normandy format this year. How many more people could be killed this year?” he said.

Mr Zelenskiy was speaking after he met senior Ukrainian military officers to discuss separatist shelling of an army position on Tuesday that killed four soldiers, in the worst single daily loss of life for several months.

A framework peace agreement signed in the Belarusian capital Minsk in 2015 has failed to halt daily shelling and skirmishes in eastern Ukraine’s Donbas region, but the intensity of hostilities had fallen following a new call for a ceasefire on July 21st.

“The armed forces are ready to respond appropriately in the event of an unforeseen situation,” he told Mr Zelenskiy.

The Kremlin said Mr Putin told Mr Zelenskiy that “for de-escalation of the conflict it is essential to halt further shelling by Ukrainian forces of populated areas in Donbas, which causes victims among the civilian population”.

Mr Putin also called on Kyiv to fully implement the Minsk agreements “including the legal aspects of granting special status” to Donetsk and Luhansk regions, which are now partly controlled by Russia’s proxy separatist militia.

In a sign of the difficulties involved in negotiating a settlement, however, Mr Zelenskiy’s office said he had insisted that “he would protect the rights of all Ukrainians, no matter where they were, and there was no need to amend the constitution of Ukraine for that”.