Ukraine Takes Another Step Toward Freedom From Russia

July 27, 2019
KYIV, Ukraine -- Ukrainians Sunday took another step in their long struggle to free themselves from the shadow of Vladimir Putin’s Russia, holding elections that were orderly, free, and fair. 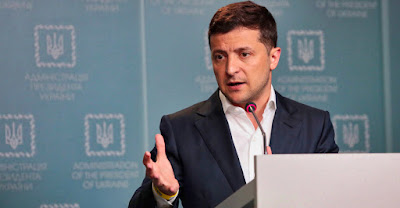 Both Ukraine President Volodymyr Zelenskyy and his party have made negotiating a way out of the five-year war with Russia one of their rare political planks.

In a country in the midst of a shooting war with soldiers sent by the Kremlin, the exercise in democracy was a peaceful way to assert independence and remind Russians there is an alternative to autocracy.

Putin annexed Ukraine’s Crimea Peninsula in 2014, a move that still has not been recognized by the West, after Ukrainians had the audacity to oust one of his cronies, President Viktor Yanukovych.

Thereafter, he also occupied parts of the Donbas region in eastern Ukraine, where he has since kept hostilities on the boil by sending in troops disguised in unaffiliated uniforms.

In a reminder of how delicate the situation remains, Ukraine announced Thursday that it had seized a Russian commercial tanker in the Black Sea, saying it had been involved in the Russian detention of Ukrainian warships in November.

It was not clear how this escalation squares with the party that overwhelmingly won Sunday’s polls, Servant of the People, nor with the man who is its standard-bearer, President Volodomyr Zelenskyy.

Both Zelenskyy—a former actor in a Netflix series who was elected in May in a lopsided victory—and his party have made negotiating a way out of the five-year war with Russia one of their rare political planks.

The 254 seats captured by his party in the 424-seat parliament, the Verkhovna Rada, makes Zelenskyy the first president since the breakup of the Soviet Union to have a parliamentary majority.

How he will use it is anybody’s guess.

Party leaders refuse to discuss policies, with one telling a team of international election observers from the U.S.—of which I was a member—that Ukrainians were “not interested in ideology.”

The one area where there have been some intimations of a policy direction by President Zelenskyy—the desire to bring hostilities with Russia to a close—seems elusive.

The current peace negotiations, called Minsk II because the protocols for it were signed in the Belorussian capital in 2015 with Germany and France in participation, has failed to bring peace to Donbas.

Speaking to a bipartisan group of observers in Kyiv last week, the U.S. Charge d’Affaires, William B. Taylor, recognized as much, saying, “I don’t think we can count on Minsk, with all due respect to the French and the Germans.”

His preferred way was to go to the U.N. Security Council and ask that U.N. peacekeepers be sent to Donbas.

“Putin can then go to his people and say, ‘The reason we’re in Donbas is to protect Russians and Russian speakers. We have succeeded because we got the international community to come in to protect the Russians,’” said Taylor.

“Then the peacekeepers can remove the militias or at least disarm them. We have had conversations with the Russians on all this and it’s not out of the possible.”

He clearly was surprised by the up-swell of Ukrainian patriotism after his aggression (the country went from 6,000 combat-ready troops to 250,000 active-duty soldiers in a matter of months, as young and old Ukrainians volunteered to go to the front) and the war has stalled longer than he thought possible.

But Putin is an autocratic leader who clearly does not bother to seek the consent of his people.

He told the leftist movie director Oliver Stone—who, true to form, is currently putting his services at the behest of the Kremlin’s propaganda needs—that “The Russians and Ukrainians are one people … one nation, in fact. When these lands that are now the core of Ukraine joined Russia … nobody thought of themselves as anything but Russians.”

That is not the case, of course. Ukrainian and Russian are mutually unintelligible languages, and Ukraine is much older than its northern neighbor, with its own distinct folkways and traditions and a history that goes back over a millennium.

The union dates only to the 1600s and covers both the recent Tsarist and Soviet eras.

Sure, both Russian and Ukrainian belong to the family of Slavic languages, but Spain manages to live with Portugal and England with Ireland (the latter two countries in fact speak the same language), to the mutual benefit of all four nations.

He also knows that a successful, prosperous, free Ukraine next door may be a showcase to Russians that he’d like to avoid.

So it is difficult to see how he would agree to a negotiated peace.

Over the long term, the best hope for Ukraine to live alongside its larger neighbor without fear of constant harassment is to wait for the Soviet generation to die off.

But whether Zelenskyy can succeed with Putin in the short term is unclear.

He is trying, holding a phone conversation with Putin soon after taking office to discuss a prisoner exchange.

That has not borne fruit yet.

Everyday life for Ukrainians has improved steadily on many fronts since Yanukovych was ousted by demonstrators (he now lives in Russia), but the country is still beset with problems, from corruption to low economic growth. Ukrainians must pay bribes to get married, go to school, take exams, or even get a parking permit.

On the positive side, getting rid of corruption has become a national obsession, and self-awareness is the first step to a solution.

The large presence of elections observers, from the International Republican Institute and its Democratic sister, and from Canada, makes clear that the West is watching and wants to help.

The Trump administration also has sent in lethal weaponry to help Ukraine fend off Putin’s aggression.

In the short- and medium-term this may be the best approach—helping Zelenskyy with military aid—while Ukrainians wait for a future that rightly belongs to them.