July 07, 2019
KYIV, Ukraine -- Standing on stage in a black t-shirt, Ukrainian rock star Sviatoslav Vakarchuk turns to his massed ranks of fans and asks if they are fed up about how their country is run. 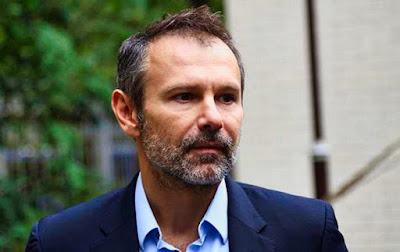 "How many of us want real change ... How many of us are tired of old politics?", he shouts out, holding his microphone in the air as the crowd cheers back in response.

The 44-year-old front man of the band Okean Elzy lays out his plans to run in July 21 parliamentary elections on a platform that includes cutting oligarchs down to size, overhauling the justice system and helping innovators.

Then the band launches into its set.

Vakarchuk is trying to tap into a growing anti-establishment mood in Ukraine - the same mood that brought TV comedian Volodymyr Zelenskiy into the presidency in April with a landslide.

The singer launched his own party, called Holos or Voice, in May and is touring the country ahead of the snap vote.

Like Zelenskiy, he has cast himself as a change from traditional politics and an enemy of corruption and low living standards.

At stake is the chance to form the government of a country on the frontline of the West's standoff with Russia following Moscow's annexation of Crimea in 2014.

War between Ukrainian troops and Russian-backed separatist forces in the eastern Donbas region has killed 13,000 people.

President Zelenskiy's Servant of the People party - named after the TV comedy series where he plays a fictional president - is on course to win the July vote.

A recent poll suggested Vakarchuk could come as high as third, making him a potential coalition ally if Zelenskiy fails to win a majority.

Both sides say it is premature to discuss a tie-up but there is common ground.

The two have an informal style and are comfortable on social media – Zelenskiy posts his runs and gym workouts on Instagram; Vakarchuk has shared snaps of his yoga poses and eight-pack abs.

Both have eschewed the normal left/right/center political labels and have a relative lack of political baggage.

Both men have said want to stick to an aid-for-reforms program with the International Monetary Fund - pledges that may reassure investors.

"For me, the IMF is like antibiotics. You don't like it, and you want to stop using as soon as possible, but if you have a real bacterial infection you take it because otherwise you'll get worse," Vakarchuk told Reuters.

Both have also said they want to keep up Ukraine's progress toward the West.

Vakarchuk proved his credentials by staging concerts in Kyiv's Independence Square during the 2013-2014 Maidan revolt against Ukraine's then pro-Russian ruler.

The refrain of one of his best known love songs "I won't give up without a fight" became a chant for the protesters.

He says the promises made by the Western-backed politicians who came to power after that revolt remain unfulfilled.

If Ukraine becomes an economic success story, he tells Reuters, it will help convince people in Donbas and Crimea they are better off as part of Ukraine.

"They see corruption, they see a lack of justice," he said. If that changes, "it will be much easier for us to win the hearts and minds of these people."

Vakarchuk wraps up his concert in Freedom Square in the eastern city of Kharkiv, close to the Russian border.

Earlier in the day he had spoken to a smaller crowd in front of a statue of another Ukrainian artist: 19th century poet Taras Shevchenko.

"I really like the way he speaks and the changes ... he wants to bring," said Roman Kaverzin, a member of the crowd. What really matters is that he is a famous figure in Ukraine. People listen to him."