July 17, 2019
KYIV, Ukraine -- A much-anticipated prisoner swap between Russia and Ukraine was thrown into uncertainty on Monday after a Ukrainian court postponed a hearing that was expected to release an imprisoned Russian journalist. 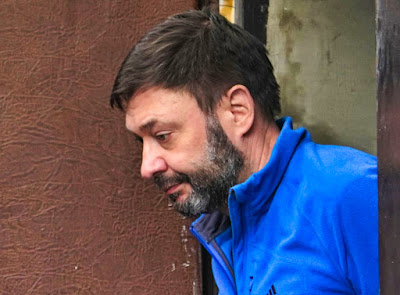 Kirill Vyshinskiy, the head of the Ukrainian office of Russia's RIA Novosti news agency in Ukraine, is escorted from a court room in Kiev, Ukraine, Monday, July 15, 2019. The Ukrainian Prosecutor General's office said that it is likely that a Russian journalist kept in detention in Ukraine is likely to be released.

Russia and Ukraine were on track to launch a major prisoner swap involving the Russian journalist and 24 Ukrainians captured in the Sea of Azov last December when the Russian envoy for human rights, Svetlana Moskalkova, arrived in Ukraine on Monday on a rare visit.

She held talks with her Ukrainian counterpart about the captured prisoners and sounded positive about what officials both in Kiev and Moscow were describing as an impending prisoner swap.

Moskalkova was invited to attend a court hearing in Kyiv on Monday afternoon that was expected to rule on the detention of Russian journalist Kirill Vyshinskiy who has been in custody for a year facing treason charges.

The court, however, abruptly adjourned the hearing until Thursday.

“I’m completely disappointed by the fact that the hearing has been scrapped,” Moskalkova told RIA Novosti, the state-owned news agency where Vyshynskiy was the Kyiv bureau chief.

Moskalkova said that she had thought that the phone call had given impetus to launch a dialogue and added that the Kyiv court may have been under pressure not to issue a ruling on Monday.

Political novice Zelenskiy, who was elected in May, has said the release of Ukrainians in Russian custody is one of the most urgent priorities of his presidency.

The Ukrainian government has been fighting with Russia-backed separatists in the country’s east since 2014 when Russia annexed Ukraine’s Crimean Peninsula.

Dozens of Ukrainians including a film director have been put on trial and convicted in what have largely been perceived as politically-motivated cases.

Dozens of Russian citizens and separatist supporters are in Ukrainian custody, facing charges of treason and inciting separatism.

The abrupt court decision has highlighted divisions inside the Ukrainian government.

Embattled Prosecutor General Yuri Lutsenko, one of Zelenskiy’s most influential opponents in power, said later on Monday that Vyshynskiy’s possible handover to Russia is “impossible” because he is a dual Russian and Ukrainian citizen.

Harlem Desir, representative for media freedom at the Organization for Security and Cooperation in Europe, in a tweet on Monday expressed hope that Vyshinskiy would be released at the next hearing.