June 21, 2019
CHERKASY, Ukraine -- An investigative journalist in Ukraine's central city of Cherkasy has died six weeks after being attacked by an unknown assailant. 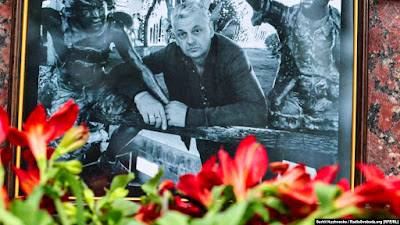 Serhiy Tomilenko, the head of Ukraine's National Union of Journalists, wrote in a posting on Facebook on June 20 that Vadym Komarov had succumbed to the injuries he sustained in the May 4 attack, which remains under investigation.

"The only reason for the attack, now the killing, according to journalists in Cherkasy, is Vadym Komarov's professional activities. He was inconvenient for many local politicians. He pushed forward with inconvenient questions regarding corruption in Cherkasy and touched on topics that resonated," Tomilenko wrote.

Tomilenko added that the journalists' union "continues to demand real, not just declared, protection of rights for Ukrainian journalists."

Komarov was hospitalized and underwent unspecified surgery following the attack in Cherkasy, about 200 kilometers (120 miles) south of Kyiv, and had remained in a coma ever since.

International media freedom watchdogs and the United States urged Kyiv to thoroughly investigate the attack and ensure that it does not go unpunished.

The U.S. Embassy in Ukraine said it was "deeply saddened" by Komarov’s death and urged "a thorough, transparent" probe into the attack.

The Paris-based Reporters Without Borders said it was "shocked" by the journalist's death, adding that it is "high time to do more to protect journalists and fight impunity in Ukraine."

"We demand from the police a rapid investigation to find those who are guilty," said Oksana Romaniuk of Ukraine's Institute of Mass Information, a Kyiv journalists' watchdog.

Harlem Desir, the representative on freedom of the media for the Organization for Security and Cooperation in Europe, said that "impunity would be a victory for those who wanted to silence Komarov and to intimidate the press."

In New York, the Committee to Protect Journalists said the brutal assault on Komarov came amid a "range of threats" faced by investigative reporters in Ukraine, including “surveillance, harassment, and assault from government and private entities.”