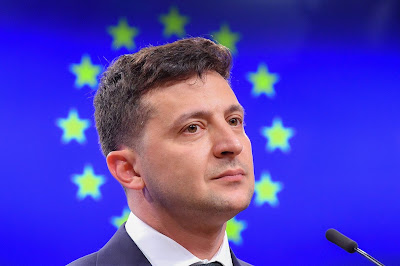 Volodymyr Zelensky, a political novice who was sworn in as president last month, has vowed to crack down on the corrupt elites that have long dominated the former Soviet republic.

The problem he has is that his opponents among the old guard won’t just stand by and let him.

Ukraine’s system of governance means Zelensky needs support from parliament, where he currently has no representation, to implement his agenda.

With his nascent party leading polls, he’s scheduled a snap election for July.

In the meantime, he’s asked lawmakers to help him make appointments to key positions and pass anti-corruption bills.

Thursday saw the assembly reject bids to replace the foreign minister and the country’s security chief.

It refused to even vote on restoring legislation that would root out illegal enrichment by forcing officials to explain the source of their wealth.

“They won’t want to give him quick victories that might improve his party’s standing in the polls,” said Alex Brideau, an analyst at Eurasia Group in Washington.

“That means Zelensky’s agenda isn’t going to move much, if at all, until the elections are held.”

Parliament sessions after Zelensky’s inauguration immediately revealed hostility toward his plans and a willingness to stymie them no matter the cost.

In the latest example, the anti-graft law is needed to maintain International Monetary Fund aid.

“The illicit-wealth law was needed not for Zelensky but for anti-corruption institutions.”

Perhaps the most important challenge to the newcomer’s efforts will be the early parliamentary vote itself.

Despite Zelensky’s party gaining popularity since his own rise to power, the rejection of his electoral-reform proposals mean that half of the legislature’s 450 seats will continue to come from single-mandate districts where his team may struggle to infiltrate established local power bases.

It’s also unclear whether the election will even go ahead after a group of lawmakers objected to the president’s decree to bring it forward from October.

The Constitutional Court will start hearing the case next week.