June 16, 2019
KYIV, Ukraine -- The party of Mikheil Saakashvili, the former Georgian president who served as governor of Ukraine's Odessa region in 2015-16, has presented its list of top 10 candidates for Ukraine’s July 21 parliamentary elections. 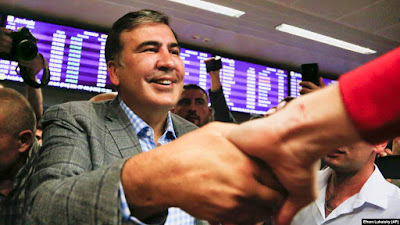 Mikheil Saakashvili greets his supporters upon his arrival at Boryspil airport outside Kyiv on May 29.

Saakashvili tops the list of his Movement of New Forces party, which he announced in a June 13 news conference in Kyiv.

He said the list has brought together people with experience in fighting "injustice and corruption."

The former Georgian leader returned to Ukraine on May 29, a day after his Ukrainian citizenship was reinstated by new Ukrainian President Volodymyr Zelenskiy.

Saakashvili was president of Georgia from January 2004 until 2013, a year after his party was dislodged by an opposition force in parliamentary elections.

In a May 28 interview with RFE/RL’s Ukrainian Service, Saakashvili hinted that he wants to play a substantial role in public life, without specifying what it might be.

Saakashvili was granted Ukrainian citizenship and appointed to the Odessa governor's post in 2015 by former Ukrainian President Petro Poroshenko, an acquaintance from his student days in Soviet-era Kyiv.

Authorities in Tbilisi stripped Saakashvili of his Georgian citizenship in December 2015 on grounds that Georgia does not allow dual citizenship.

Then, when relations with Saakashvili soured over reform efforts and the fight against corruption, Poroshenko sacked him from the Odessa governor's post in November 2016.

In July 2017, after Saakashvili created his party, Poroshenko issued a decree that stripped Saakashvili of his Ukrainian citizenship.