June 28, 2019
OTTAWA, Canada -- Ukraine's new president will visit Toronto next week for a major international conference on his country's future that Canada is hosting, and where he will meet Prime Minister Justin Trudeau. 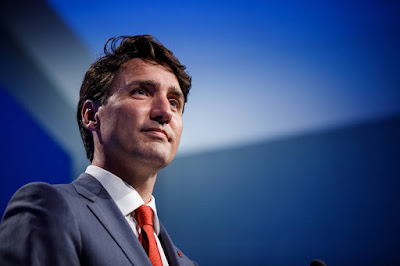 Trudeau's office said he and Volodymyr Zelenskiy will discuss Ukraine's reform efforts and its path toward integration with Europe. Zelenskiy,  ran away with this spring's presidential election, unseating Petro Poroshenko.

He is now tasked with guiding his country through its ongoing conflict with Russia, which annexed Ukraine's Crimea region in 2014 and fomented a pro-Kremlin insurgency in the country's east that has left more than 13,000 dead.

Ukraine Reform Conference is a three-day gathering that begins Tuesday, which the government said will include key international friends and partners to support Ukraine.

Trudeau said in a statement that he wants to use the meeting with Zelenskiy to reaffirm Canada's deep commitment to the Ukrainian people.

Ben Rowswell, the president of the Canadian International Council, said the conference will underscore the West's and Canada's commitment to Ukraine in the face of Russian aggression.

"Canada has been a real stalwart defender of democracy in Ukraine, part of a broader approach we have to the international order to ensure that countries, even if they're very close to Russia are able maintain their sovereignty and to operate as democracies free from the interference of hostile foreign powers like Russia," said Rowswell, who most recently served as Canada's last ambassador to Venezuela.

Canada became the first Western country to recognize Ukraine's independence in 1991 after the fall of the Soviet Union.

Canada has supplied it with $785 million worth of military, legal, financial, development and political assistance since 2014 when President Vladimir Putin tried to bring the country back into Russia's sphere of influence as Ukraine was poised to deepen its integration with the European Union.

With the federal election set for October, Ukraine's turmoil has implications for Canada's domestic politics: the 1.3 million Canadians of Ukrainian descent comprise one of the country's most influential diaspora communities.

That reality was not lost of on the Conservatives under former prime minister Stephen Harper, who visited Kyiv repeatedly and sent special teams of Canadian election monitors to support Ukraine's various ballots over the years.

The Trudeau government has followed suit.

Foreign Affairs Minister Chrystia Freeland's own Ukrainian heritage has helped keep the country near the top of her agenda.

Freeland was one of the first Western politicians to visit Zelenskiy in Kyiv after he was declared the victor last month.

A senior Canadian official who was in the room for their meeting, but was not authorized to speak for attribution, said that while the new president and his entourage have little political experience, Canada isn't worried he will shift Ukraine back towards the Kremlin and away from Canada and its western allies.

Zelenskiy is frequently compared with former U.S. president Ronald Reagan, who went from being a Hollywood actor to the California governorship before winning the Oval Office.

Though Zelenskiy lacks political experience, the long-running political satire in which he portrayed a fictional Ukraine president demonstrated a well-researched and sophisticated understanding of politics and corruption, the Canadian official said, comparing him to Canada's Rick Mercer.

Canada has offered Zelenskiy's officials training on how to actually run a government because they lack experience and are running a country whose institutions are not as strong as those in the West.