June 14, 2019
WASHINGTON, DC -- Ukraine says the U.S. officials in charge of an international database on geographic names have agreed to change the official spelling of the Ukrainian capital from the commonly used Russian variant, Kiev, to Kyiv -- a spelling that more accurately reflects its spelling and pronunciation in the Ukrainian language. 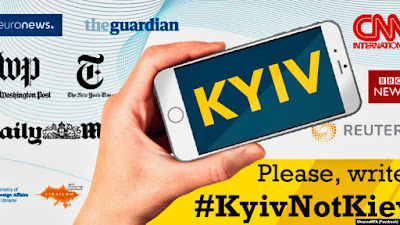 Ukraine has been campaigning under the slogan #KyivNotKiev for international entities and countries to spell places in Ukraine in a way that reflects Ukrainian phonetics.

In a statement posted on June 13 on its Facebook page, Ukraine's embassy in Washington said the decision by the U.S. Board on Geographic Names would come into effect on June 17.

It said the change in the board's international database would impact the official spelling of the Ukrainian capital beyond the United States -- particularly for international flight listings at airports around the world and by international organizations.

The statement said the request for the change was made by Ukraine's ambassador to the United States, Valeriy Chaliy.

The U.S. Board of Geographic Names is a federal body that operates under the U.S. secretary of the interior.

It has a mandate to standardize geographic names for official U.S. government business.

In October 2006, the board approved the spelling Kyiv as one of the official standard forms of the Ukrainian capital.

But it also said official U.S. government documents could "continued to refer to the city using the conventional spelling Kiev when context calls for that spelling."

The board said it based its decision on "recommendations from the Department of State that Kyiv is the locally preferred Latin-alphabet rendering of the place name and should be available for official use to better assist the people and Government of Ukraine to promote that country's national identity."

Ukraine has been campaigning under the slogan #KyivNotKiev for international entities and countries to spell places in Ukraine in a way that reflects Ukrainian phonetics.

In May, the Ukrainian government approved a law that requires all Slavic names, including Russian ones, to be spelled according to Ukrainian-language standards.