June 02, 2019
WASHINGTON, DC -- The U.S. could send Ukraine anti-ship and anti-aircraft weapons to defend against Russia if a bill from the House Foreign Affairs Committee’s Democratic chairman and top Republican becomes law. 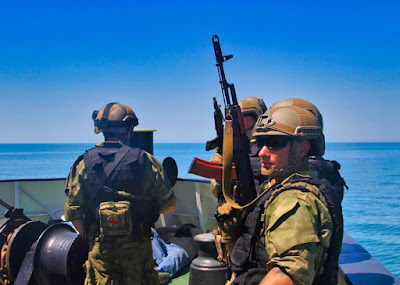 It would also ask the president to determine whether Ukraine should be a major non-NATO ally, condemn Russia’s detention of 24 Ukrainian sailors and urge Russia to implement the Mink II peace agreement.

The bill comes days after the Senate Armed Services Committee advanced a draft 2020 defense policy bill that authorizes up to $300 million for security assistance to Ukraine, making $100 million available for lethal assistance and adding coastal defense and anti-ship missiles as eligible categories of security assistance.

“By continuing to provide security assistance to Ukraine that furthers its implementation of defense reforms and achievement of NATO interoperability, we can better equip our ally with sophisticated lethal weapons to defend itself and deter Russian aggression,” McCaul said in a statement Friday.

“As the world’s lead defender of freedom, the United States must employ all tools necessary to protect our shared values.”

A U.N. maritime tribunal ruled Saturday that Russia must immediately release three Ukrainian naval vessels it captured in November and free the 24 sailors it detained.

The confrontation in the Kerch Strait, which links the Sea of Azov with the Black Sea, marked a flashpoint in the simmering conflict over Russia’s 2014 annexation of the Crimean Peninsula.

Russia seized Crimea in a move that Ukraine and most of the world view as illegal.

The Trump administration in March cleared a sale to Ukraine for 210 Javelin anti-tank missiles and 37 launchers worth $47 million.

Through a joint commission and training group, there’s been an array of international aid to Ukraine, which has included electronic warfare equipment, counter-artillery radars and two 110-foot coast guard cutters.

Since 2014, the United States has provided Ukraine more than $3 billion in total assistance, including security and non-security assistance, as well as three $1 billion sovereign loan guarantees, according to a State Department official.