In Brussels, Zelensky Underscores Ukraine’s Course Toward NATO And The EU 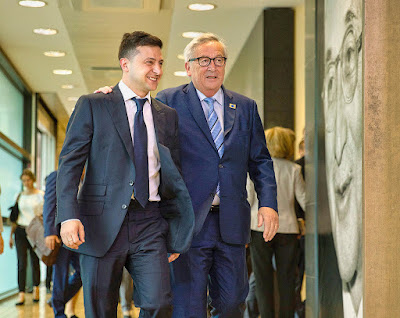 While the politically untested president underlined Kiev’s steadfast endeavor to join the EU and NATO while remaining committed to its debt obligations to foreign creditors, his counterparts urged Ukraine to continue reforms aimed at combating graft and bolstering the rule of law.

Noting that a wide range of issues was discussed with Mr. Juncker, including the EU’s consistent support of Ukraine’s “sovereignty and territorial integrity,” Mr. Zelensky said that peace in the Russo-Ukrainian war can only be achieved through dialogue.

“Our goal remains unchanged – the liberation of the Donbass exclusively through political and diplomatic channels,” Mr. Zelensky said, while urging the EU to keep existing sanctions towards Russia for warmongering in Ukraine as well as intensifying them.

More than 13,000 Ukrainians have been killed since Moscow invaded Ukraine in February 2014.

At least 51 soldiers have been killed this year through May, according to The Ukrainian Weekly’s count based on data from the Joint Forces Operation.

Three more soldiers were killed on June 4-5, and as many were wounded.

For his part, Mr. Juncker confirmed that the 21st EU-Ukraine summit – the highest level yearly meeting Kiev has with the 28-member economic and political bloc – will take place in Kiev on July 8.

Topics included reforming the Security Service of Ukraine (SBU) and other intelligence agencies, as well as the defense and industrial complex, and instituting overall civilian control over security and defense.

Ukraine’s international lenders and partners in the U.S. and the EU have urged Kiev to remove corruption and financial crime investigative powers from the SBU and hold Ukroboronprom, the nation’s state-run arms conglomerate, more accountable to scrutiny given that about $4 billion is spent annually on defense.

“Mr. President, you have a powerful mandate to implement key reforms that are vital for the security and prosperity of all Ukrainians, as well as Ukraine’s integration with NATO,” Mr. Stoltenberg said.

Ukraine’s president, a 41-year-old former comedian, on June 5 told 1+1’s morning program from Brussels that he wants to hold a national referendum on NATO accession.

The latest polls show no more than 43 percent public support for Ukraine’s membership in the military defense bloc.

A majority, however, backs EU membership.

During the live television broadcast, Mr. Zelensky also said that he doesn’t expect acting Health Minister Ulana Suprun, a Detroit native of Ukrainian extraction, to hold her post once a new government is formed.

“Suprun? Ha-ha-ha. Well, there are different attitudes towards her. You know how she is called [Doctor death], don’t you know? Thank god I have another doctor in my family,” Mr. Zelensky said.

In response, Dr. Suprun said during the weekly government meeting on June 5, “I can’t arrive at any conclusions regarding what kind of person President Zelensky is.”

She continued: “He has worked for a short period only. I hope that he will not make any conclusions without talking to me [first], and not having seen the [effect] of our work.”

Dr. Suprun has been praised by the World Health Organization as well as foreign donors of Ukraine for removing long-entrenched opportunities for corruption in the country’s health care system.

She has introduced a financial system modeled mostly after how Britain provides health care by having “money follow the patient” and ensured transparent procurement of crucial medicine through international assistance organizations.

Iuliia Mendel, 32, a former stringer in Ukraine for The New York Times who simultaneously worked as a press secretary for the World Bank, was appointed as the President Zelensky’s press secretary.

Ukraine’s leader also re-appointed the country’s second president, Leonid Kuchma, to lead Kiev in the Trilateral Contact Group that is part of the failed peace process in Russia’s war against Ukraine.

The group meets in Minsk and includes representatives from Russia and the Organization for Security and Cooperation in Europe (OSCE), whose Special Monitoring Mission is charged with observing and reporting on the situation in the two easternmost regions of Luhansk and Donetsk where a hot war is in its sixth year.

“In my life, I’ve gotten used to making decisions, implementing them and being responsible for them,” Mr. Kuchma said in a news briefing on June 3.

The veteran statesman quelled a previous row with Kremlin leader Vladimir Putin in 2003 when they sealed a bilateral agreement to share waters in the Kerch Strait that connects the Azov and Black seas.

Tensions rose when Russia started building a dike from the Russian mainland to Ukraine’s Tuzla Island, according to a Reuters report from December 29, 2003.

After Moscow annexed the Ukraine territory of Crimea in March 2014, Russia completed a 12-mile bridge over the strait in May 2018 and ramped up arbitrary inspections of vessels coming to and from Ukrainian ports.

Russia detained 24 Ukrainian crewmen and three ships in November 2018 as they approached the Kerch Strait in a move that added another dimension to the ongoing war.

Back in Brussels, Ukraine’s ultimate reliance on Russian natural gas also was an issue.

Once Russia completes the Nord Stream 2 underwater pipeline network that is scheduled to go online next year, Ukraine’s significance as a gas-transit country to Europe will be diminished.

Ukraine cut off direct Russian gas supplies in 2016 but essentially imported it from EU destination countries that ordered surplus supplies from Moscow.

“One of the important areas of our common interaction at the European level is the issue of energy security, preservation of the strategic role of the Ukrainian gas transit system and counteraction of Nord Stream 2,” he said.

Russia’s state-run gas monopoly Gazprom has already said that it will cut transit through Ukraine next year even if the project is unfinished.

Kiev has already pumped more than one-third of its 31 billion-cubic-meter storage capacity into 12 reservoirs in preparation for the likely gas shutoff, according to the Interfax-Ukraine news agency.

Meanwhile, in the Hague on June 3, Russia argued for rejection of the jurisdiction of the United Nations’ International Court of Justice on terrorism accusations levied by Ukraine regarding Russian occupation of Crimea and the Donbass.

During Ukraine’s counterarguments in the ICJ on the following day, Deputy Foreign Affairs Minister Olena Zerkal said, according to RFE/RL: “Did [Russia] stop the financing of terrorism in Ukraine? No. Did it help us find the authors of terrorist acts? No.”

A second round of arguments in the case was scheduled for June 6-7.