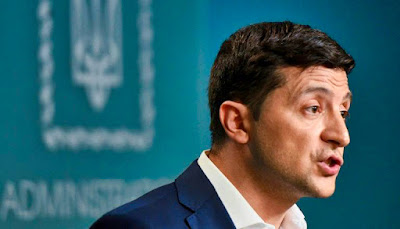 President Zelensky urged Vladimir Putin to comply with an International Tribunal for the Law of the Sea ruling requiring Russia to free the sailors -- but Moscow does not recognise the tribunal's jurisdiction.

"I want to appeal to the President of the Russian Federation Vladimir Putin," the recently elected Zelensky told journalists during a briefing.

"We all have children. Return children to their parents," he said, adding that he was "very emotional". Russia last year fired on and seized three Ukrainian navy vessels, capturing Ukrainian sailors near the Kerch Strait as they tried to pass from the Black Sea to the Azov Sea.

At the end of May the International Tribunal for the Law of the Sea, located in Germany, called on Russia to release the sailors "immediately" and to allow them to return to Ukraine.

Russia does not recognise the tribunal's jurisdiction to rule in the affair and did not send representatives to the hearing.

Zelensky also denounced the decision this week by the Parliamentary Assembly of the Council of Europe (PACE) to readmit Russia to the Strasbourg-based group.

The president said he did "everything that I could" during a recent trip to Europe to convince leaders to oppose the move.

"But this decision was made a long time ago...Unfortunately, I was not heard."

Moscow was stripped of its voting rights in PACE in 2014 over its annexation of Crimea.

The Ukrainian delegation walked out in protest over Moscow's reinstatement and announced it would suspend its work in PACE apart from on votes blocking Russian participation.

Russia and Ukraine have been locked in a bitter feud since a popular uprising in Kyiv forced out a pro-Kremlin leadership in 2014.

Moscow has been accused of fuelling a rebel conflict in eastern Ukraine that has cost the lives of some 13,000 people.