May 13, 2019
KIEV, Ukraine -- The former WBC heavyweight champion of the world, Vitali Klitschko – now mayor of Kiev, Ukraine – has held talks with bosses at German theme park Europa Park about the development of a potential theme park in the city he governs. 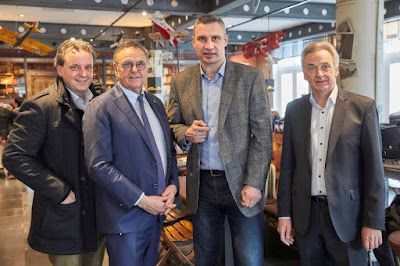 Klitschko, who was joined by other city officials, discussed the potential park with Europa-Park bosses as he is a regular visitor at the German park and a big admirer of it.

Klitschko, who was joined by other city officials, discussed the potential attraction with Europa Park bosses as he is a regular visitor to the German park and a big admirer of it.

"I expect a strong economic upturn for Kiev and all of Ukraine and have come here to discuss the structure of Europa Park and how we might learn from it to build our own park in Kiev," said Klitschko.

"I have come incognito to Europa Park with my children for years because I want to have no fuss – only as much fun as possible with my family.

"I am a big rollercoaster fan and mine and my children’s favourite ride is the Silver Star at the park."

If it becomes a reality, the Kiev park will sit on a 130-hectare space in Hydropark, an island area of the city in the middle of the Dnipro River that is reachable by the local metro system.

Hydropark is already a popular recreational spot with locals in the Ukranian capital and would represent a natural destination with plenty of tourism potential.

It attracted around six million visitors in 2018.