May 12, 2019
DONBASS, Ukraine -- Russia's FSB is introducing additional restrictions on crossing the section of the Russian-Ukrainian border uncontrolled by Ukraine. 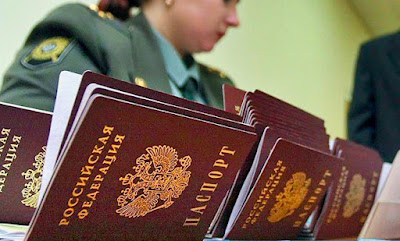 The Russian occupation forces' command in Donbass has ordered personnel of formations and units of Russia's army corps No.1 (Donetsk) and No. 2 (Luhansk) to obtain Russian passports.

At the same time, Russia's Federal Security Service (FSB) is introducing additional restrictions on crossing the section of the Russian-Ukrainian border uncontrolled by Ukraine.

The restrictions primarily concern persons related to the occupation administrations or those who are serving in Russia's occupation forces and in the security forces of the so-called "Donetsk and Luhansk People's Republics" ("DPR/LPR"), the Ukrainian Defense Ministry's press service said on May 11, referring to the Main Directorate of Intelligence.

Crossing the Ukrainian-Russian border for the said category of persons is possible only, is they go for business trips having informed the Russian side of the time, place and purpose of the trip.

If such persons attempt to enter the Russian Federation on their own, they are carefully examined at Russian checkpoints, after which, they are mostly banned from entering Russia.

As UNIAN reported earlier, Russian President Vladimir Putin on April 24 signed a decree on the expedited procedure for the issue of Russian passports to residents of temporarily occupied Donbass.

On April 27, Putin said Russia could simplify the procedure for granting Russian citizenship to all Ukrainians – not only to those who reside in Russia-occupied districts in the east of Ukraine.

On April 29, a center opened in the town of Novoshakhtinsk in Rostov oblast offering services for issuing Russian passports to residents of Russia-occupied districts in Ukraine's Luhansk region.

On April 30, a similar center opened in Rostov oblast's village of Pokrovskoye to service residents of the occupied Donetsk region.

On May 1, Putin signed a decree under which more categories of Ukrainian citizens will be able to obtain Russian citizenship with the use of the simplified procedure, in particular, these are citizens of Ukraine who do not have citizenship of another state, as well as stateless persons who were born and permanently resided in Crimea and left the peninsula before March 18, 2014, as well as their children, husbands (wives) and parents.

Ukraine's Ministry of Foreign Affairs resolutely demands that the Russian side immediately repeal all unlawful decisions regarding the issue of Russian passports to Ukrainian citizens and eliminate their negative consequences.

Passportization is an act by one country, mainly related to Russia, of inducing residents of another country to take up its citizenship and possess its passport.