April 19, 2019
KIEV, Ukraine -- On Sunday, Ukrainian voters will go to the polls to elect a president — and their choice is between a comedian who played a president on TV and a former “chocolate king” who has been running the country for five years. 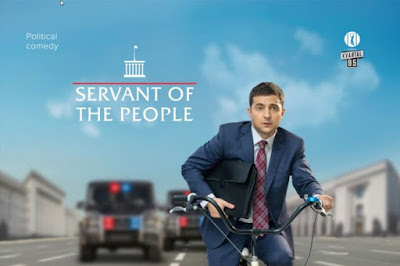 Volodymyr Zelensky, a famous comedian who portrayed Ukraine’s head of state for years on a popular comedy show, is facing off against the incumbent president and former confectionary tycoon, Petro Poroshenko.

As of now, it looks like Zelensky will win Sunday’s runoff in a landslide, three weeks after he beat Poroshenko and a former Ukrainian leader in the election’s first round.

It’s quite the rise for an ordinary guy who, well, played an ordinary guy-turned-president on television. Zelensky — or “Ze,” as he’s more popularly known — has no prior political experience and hasn’t offered a detailed blueprint for how he would govern.

But he’s struck a populist, anti-corruption message that has resonated with millions of Ukrainians suffering from poverty and government graft.

That, plus his previous celebrity, made him a formidable force during the Eastern European country’s election.

“I want to see joyful faces around” and to “make people happier in Ukraine,” he said on the campaign trail.

While it’s unclear exactly how he would do that, there’s no question Zelensky represents what previous Ukrainian politicians haven’t: change.

“There’s been a desire for a new face for a long time,” Melinda Haring, a Ukraine expert at the Atlantic Council in Washington, DC, told me.

“It was clear the people wanted someone without the same baggage and connections to political dinosaurs.”

Poroshenko represents the stagnant Ukraine of today — and voters hate that.

“After almost 30 years of electing to the presidency either relatively pro-Russian or officially pro-Western candidates from the economic and political elite, Ukraine remains one of the poorest nations in Europe,” Andreas Umland, an expert at the Institute for Euro-Atlantic Cooperation in Kiev, wrote for the European Council on Foreign Relations think tank on April 16.

And while the country has been experiencing a bit of growth lately, Ukraine is still among Europe’s poorest — if not the poorest — countries.

The country’s troubles have led millions of Ukrainians to flee in search of a better life.

“Ukrainians just want a normal standard of living,” Haring told me, but “Ukraine has gotten poorer as Poroshenko has gotten richer.”

Since the former chocolate magnate, who led the very successful company Roshen, took power in 2014, corruption has only worsened as the government’s ties to oligarchs have strengthened.

That’s made it harder for Ukraine to attract foreign investment and help the country’s economy rebound.

That, to put it mildly, is not an optimistic outlook for it to take a half-century to become another European economic success story.

So while Poroshenko gets high marks from many for pushing back against Russia’s invasion of parts of Ukraine’s east and south, a record he continues to tout, experts say that counts for very little in this election.

“Poroshenko either misread the voters or thought his campaign themes — army, language, and faith — would carry the day,” Steven Pifer, the US ambassador to Ukraine from 1998 to 2000, told me.

Voters clearly want to hear new ideas for a new Ukraine, and that means stemming the country’s rampant corruption and kick-starting the nation’s sputtering economy.

Poroshenko is such a symbol for Ukraine’s old ways that it’s almost funny.

Zelensky represents what Ukraine wants to be

Zelensky, 41, made his name on Servant of the People, a comedy program that you can watch on Netflix in the US.

It follows the life of Vasyl Petrovych Holoborodko, an everyman schoolteacher who unexpectedly becomes president and takes on the nation’s oligarchs.

The actor wants to do the same thing — but in real life.

Instead, he’s mainly toured the country with comedy troupes to perform in skits and make audiences laugh, experts tell me.

But he has leveraged social media to directly connect with voters and make his pitch.

Not much is known about his foreign policy except that he is mainly pro-Western, wants Ukraine to enter the European Union, and would seek NATO membership for his country — all positions that don’t separate him much from Poroshenko.

There are two big question marks surrounding Zelensky, however.

The first, of course, is his inexperience.

Ukrainians have mostly shrugged that off in the past, though, like when voters in Kiev voted in 2014 to make former heavyweight boxing champion Vitali Klitschko their mayor.

The second, and more important, question is how close his ties to a Ukrainian oligarch, Ihor Kolomoisky, really are.

Zelensky’s show appeared on Kolomoisky’s TV channel, and the billionaire has long been a Poroshenko rival.

Some worry that the comedian may simply be a tool of another Ukrainian fat cat trying to wield power, a charge Zelensky denies.

“The public is in such a mood that they’re willing to give on a lot,” Haring told me.

And so it’s likely that Ukraine will soon usher in a new era of its politics by letting a comedic actor take the reins.

It sounds like a bad joke, but it’s reality.