America Must Stand With Ukraine Against Russia

April 28, 2019
WASHINGTON, DC -- The free and fair election in Ukraine of new President-elect Volodymyr Zelensky reflects a positive step for Ukraine’s democratic future, but the same challenges from Russia remain. 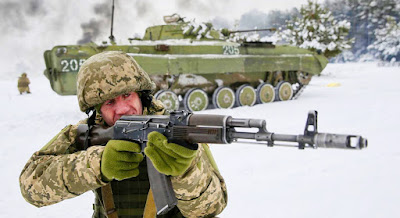 There is still the looming cloud of Ukraine’s active military conflict with Vladimir Putin’s Russia, as well as ongoing efforts by the Kremlin to sow discord and chaos through sophisticated disinformation and propaganda campaigns against the Ukrainian government and society.

If we want to deal a blow to Russia, then helping challenge Putin on his doorstep sends a strong signal that America will stand by its allies wherever they are.

Moscow continually ignores international law and the Minsk Accords by actively supporting the rebels in Eastern Ukraine and maintains its illegal control of Crimea while also blockading Ukrainian ports from vital commerce.

More importantly, Russia’s November 2018 attack on the Ukrainian Navy in the Sea of Azov occurred in neutral waters and in clear violation of freedom of navigation.

While the imposition of sanctions on the Russian officials responsible for these acts by the administration on March 15 are having an impact, the biggest blow to Russia is the continuation of a free, independent, and democratic Ukraine.

I’ve traveled to Ukraine and been on the front lines of Putin’s hybrid war where Russia tests its new cyber weapons and tactics.

One of the most devastating examples, Russia’s “NotPetya” virus, originated in Ukraine, spread across sixty-four countries.

It caused more than $10 billion worth of damage to U.S. government agencies and companies like Maersk, and it also fully shut down the Port of Los Angeles.

In advance of Ukraine’s parliamentary elections in October and the start of President-elect Zelensky’s term, I will continue to closely watch Russia’s propaganda and cyber assaults because I fear Russia will use them to interfere in our 2020 elections.

One of President-elect Zelensky’s key challenges will be implementing critical economic and political reforms in a country still reeling from its corrupt past.

Currently, the ten wealthiest individuals in the country account for 10 percent of the country’s gross domestic product.

We must work with Ukraine to develop policies to eliminate monopolies and give consumers fairer markets.

While the government has been slow to implement key anti-corruption reforms, we need to continue to support entities like the High Anti-Corruption Court of Ukraine.

The words and deeds of the Trump administration and Congress continue to show America’s unwavering support for Ukraine.

America stands unified in backing Ukraine’s sovereignty when we take actions like Secretary of State Mike Pompeo’s July 2018 Crimea declaration and the bipartisan House passage of the Crimea Annexation Non-Recognition Act in March.

There are more actions we can take.

Specifically, we should develop an effective Black Sea strategy where the United States, NATO, and other U.S. allies can regularly deploy naval assets there to better support Ukraine against Russia.

We should also increase foreign military sales and security assistance to Ukraine. Last year’s delivery of the Javelin anti-tank missiles was a game-changer for the country’s ability to better defend itself against Russian proxies in Eastern Ukraine.

Our hardworking Special Representative for Ukraine Negotiations, Ambassador Kurt Volker, recently said, “We also need to look at things like air defense and coastal defense . . . It’s whatever is reasonable and necessary for Ukraine to have a modern capability to defend itself and prevent further aggression against its territory.”

The Sea of Azov attack exhibited the urgency for Ukraine to have the necessary capabilities to defend itself.

That is why I sent a letter to National Security Advisor John Bolton, along with my colleagues Adam Kinzinger (R-IL), Brian Fitzpatrick (R-PA), and Greg Pence (R-IN), to offer congressional assistance on providing additional offensive and defensive military equipment to Ukraine for a more effective deterrence.

From his actions in Ukraine and across Europe and the world, it is clear that Vladimir Putin wants to reclaim the super power status of the crumbled Soviet Union.

Let us continue to stand with Ukraine and our allies so that does not ever happen.