April 18, 2019
KIEV, Ukraine -- The Ukrainian candidate Volodymyr Zelensky is hardly the first entertainer to get into politics — and he just might win. 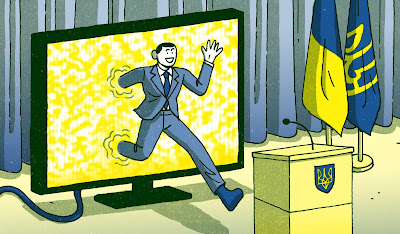 Vasyl Petrovych Holoborodko was a high school teacher whose rant against government corruption went viral and catapulted him into the race for president of Ukraine, which he miraculously won.

He’s also not real, nor was the election.

But Volodymyr Zelensky, who stars as Mr. Holoborodko in the hugely popular Ukrainian television show “Servant of the People,” is.

And now Mr. Zelensky — whose political party shares a name with his TV show — has a strong chance of winning the actual race for president of Ukraine.

Confusing? Not for Ukrainians, nearly a third of whom voted for Mr. Zelensky in the first round of presidential elections last month and propelled him into Sunday’s runoff with the incumbent, Petro Poroshenko.

Being both an entertainer and a populist isn’t so unusual, given the way TV showmen from Italy’s Beppe Grillo to Donald Trump have scored big on popular disenchantment with politics.

But there can be little question that Mr. Zelensky, 41, has taken politics-imitating-art to a new level.

Mr. Zelensky’s main card, perhaps his only card, is intense popular disillusionment with the perceived failure of elected officials to eliminate corruption and raise living standards.

He has no experience in politics, his platform is a mishmash of vague promises, and he may not be quite the outsider his TV character is.

He is linked to one of Ukraine’s murkier oligarchs, Ihor Kolomoisky, whose television channel airs Mr. Zelensky’s show and who has actively promoted his candidacy.

Once allied to Mr. Poroshenko, Mr. Kolomoisky is now bitterly opposed to the president.

Mr. Poroshenko, 53, is fighting a steep uphill battle, but polls show that he has been making some headway with appeals to patriotism and arguments that Ukraine needs an experienced leader.

A confectionary magnate who served in earlier Ukraine governments, he carries the stigma of old politics and powerful oligarchs, and he has had his share of policy failures.

But he can take credit for some credible reforms since he became president in 2014.

He has kept good ties to Western governments and the International Monetary Fund, and has made strides in rebuilding the nation’s army.

It would be unfair, moreover, to hold Mr. Poroshenko responsible for the expense, casualties and national humiliation of the smoldering war with secessionists in eastern Ukraine.

This is a war fueled and perpetuated by Russia for the deliberate purpose of destabilizing Ukraine, and Mr. Poroshenko has been wise to avoid actions that would give Moscow an excuse for more violence.

The war, at least, has taken Russia out of the campaign, since no credible candidate would argue for closer ties to the Kremlin.

Ukraine certainly needs to do better against corruption.

A gaggle of oligarchs still exert an oversize influence over Ukraine’s politics and economy, and the country has suffered a severe economic slump.

But voters in emerging democracies and changing nations like Ukraine have often been too quick to blame the political leaders of the moment for all their woes, and to believe that a fresh new face can quickly make things better.

Yet Ukrainians have been disappointed by five consecutive presidents who came up through the old system, so they may have a point in looking for a new model.

Voters will have a chance to compare the models at a debate between Mr. Poroshenko and Mr. Zelensky scheduled for Friday, before casting their ballots on Sunday.

Let’s hope that Mr. Poroshenko will show that he knows what he needs to change, and that Mr. Zelensky will demonstrate he is aware that leading a nation is not an acting job.

Either way, the fact that the electoral system can throw up an outsider, and that Ukrainians are actively searching for the better option, bears witness to a functioning democracy.

Western supporters of Ukraine may feel more comfortable with an experienced hand, but should Mr. Zelensky win, as seems likely, they should not hesitate to give him their full support.