March 11, 2019
BRUSSELS, Belgium -- It is risky to stop near the old grain silo on the road from Mariupol to Marinka, two towns in eastern Ukraine. 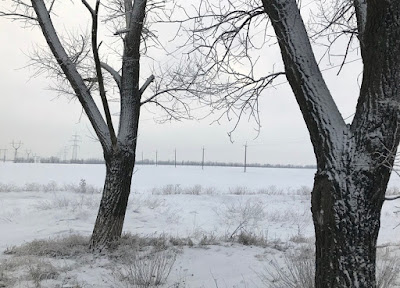 View from grain silo toward Donetsk People's Republic (DPR) on road to Marinka.

Donetsk People's Republic (DPR) snipers had targeted the site from the nearby "fire line" because it housed Ukrainian soldiers, the soldiers told EUobserver.

An LPR anti-tank grenade had recently hit the engine of a civilian car, hospitalising the driver, they added.

Small arms fire also injured a civilian in Marinka, international monitors from the Organisation for Security and Cooperation in Europe (OSCE) confirmed.

Mortars above 100mm are prohibited by the Minsk accords, an international pact.

But if the LPR fires them, then the 93rd brigade brings forward high-calibre ones to fire back.

That is daily life in what Ukrainians call the "grey zone" - a patchwork of towns, villages, and farms along the contact line - four and a half years after the conflict began.

The zone is peppered with landmines and military checkpoints.

The DPR and LPR also send out "blind groups" at night to do reconnaissance and to kidnap Ukrainian soldiers, the 93rd brigade said.

Ukraine has no doubt who it is fighting.

"When I say the enemy, you understand this is the Russian Federation," the colonel in command of the 93rd brigade, who asked not to be named for security reasons, told EUobserver.

"Yesterday's miners can't find a tank in their mines and learn how to drive it without special training," he added, referring to local men in LPR-held territories, many of whom were coal miners.

Russian military officers commanded the DPR and LPR armies, which Russia has equipped with tanks, artillery, and other systems lieutenant general Serhiy Nayev, the head of Ukrainian ground forces in the region, also said in an interview in the town of Kramatorsk.

"The [DPR and LPR] command staff are Russian officers, from the top down to the level of brigades and individual regiments. There are Russian officers also in some specialised units, such as radio-electronics, military intelligence, and logistics," Nayev said.

"Together with regular Russian troops and Russian volunteers, the number of Russian nationals fighting there is about 11,000," he estimated.

The other DPR and LPR fighters, some 21,000 of them, were mostly Ukrainians "who don't like to obey the law," he said.

But this figure included about 1,500 volunteers and mercenaries from other European countries, he added.

The EU and NATO also say that Russia invaded Ukraine in 2014 under DPR and LPR flags to stop it from aligning with the West.

They also deployed NATO battalions in Poland and the Baltic states to deter wider aggression, in a conflict that is shaping European politics and geopolitics.

The grey zone is also a grey area in terms of information, however.

Russia says the DPR and LPR are "separatists" fighting a "civil war".

"The internet remembers official statements from the Russian side concerning all the issues," Russia's EU embassy told EUobserver when asked for a comment.

"There is no war between Russia and Ukraine at all. These are two ... fraternal peoples," Kremlin spokesman Dmitry Peskov also said.

Academics in Brussels and Washington have discussed to what extent Russian "disinformation" posed a threat.

But there is no debate on the Ukraine front line.

When LPR forces captured the city of Luhansk in 2014, they seized its 186-metre TV tower to broadcast Russian stories into occupied territories.

But in 2017 Ukraine built a 136-metre tower "so that we can also be heard and seen", Yuri Klymenko, the deputy governor of the Luhansk region, told EUobserver in the town of Severodonetsk.

The LPR tower tells people Ukraine is in ruins and its army is perpetrating war crimes.

Ukraine tower says Ukraine is doing well and that it wants peace.

Klymenko recalled being in Kiev one day when a relative who lived in the LPR phoned him to say she had seen news that the US had raised its flag over the Ukrainian parliament.

"I knew it wasn't true, but I still went to the parliament to see with my own eyes," he said, in a sign of the fascination that Russian propaganda can create.

Russia also brings in EU friends to spread its stories.

Nicolas Dhuicq, a French far-right politician who went via Russia to the DPR last November, told EUobserver that "an old man" there said "five of the most beautiful girls in his village [were] raped by the Azov battalion [a Ukrainian unit]".

When asked where and when the alleged crime took place, Dhuicq said: "I don't know ... I just let him [the old man] talk, he was crying".

OSCE and UN monitors declined to comment on Dhuicq's story.

But neither of them recorded rape allegations in the region in their official reports from that time.

"There were no incidents of sexual assault [in 2018]", Nayev, the Ukrainian lieutenant general, also said. Russia was using people like Dhuicq "to create the impression that there's doubt on the nature of the conflict even in Europe," Nayev said.

The fighting is less intense than in 2014 and 2015, when Ukraine fought the DPR and LPR for control of Avdiivka, Kramatorsk, Marinka, and Severodonetsk.

Klymenko, the Luhansk deputy governor, said people watched as "columns of heavy armour rolled in from the Russian Federation" and that more than 8,000 "objects", such as bridges or buildings, were destroyed in the ensuing warfare.

Vladimir Yelisyeyev, the chairman of Impulse, an electronics firm in Severodonetsk, remembered hiding with staff and their families in a shelter as "rockets exploded very close to the factory".

"People fled town and the streets were empty, even on summer evenings," he said.

Impulse, and other businesses on the Ukraine-controlled side, returned to work when things calmed down.

Several bridges and other objects have been rebuilt, some with EU money.

Shops were well-stocked in January.

Hotels and restaurants had handfuls of clients and there were cars and trucks on the roads despite heavy snow.

"As soon as they [Russia] knew we had Javelins, the number of tank attacks significantly went down," he said.

US and Canadian anti-artillery systems and sniper kits, as well as British and German training of Ukrainian soldiers also helped, the colonel added.

The grey-zone normality is not normal, however.

"The worst thing is, that people have gotten used to the conflict ... for instance, they can tell by the sound of flying objects what kind of weapon it is and even its calibre," Klymenko, the Luhansk deputy governor, said.

When heavy weapons recently shelled an area 1km from the village of Krimska, the explosions reverberated in a local school, Klymenko said, but "the teacher did not even stop her dictation and the children did not pay any attention, they just kept taking notes - can you imagine that?".

"If there's a fire attack on Marinka, older children bring young ones to the shelter, but there's no panic," Oleksandr Kuts, the governor of the Donetsk region, told EUobserver in Kramatorsk.

It is harder to know what life is like for the 2.7m Ukrainians on the other side of the line.

The "armed groups" who run the DPR and LPR, the UN has said, have "imposed an arbitrary system of rules" and "tortured and ill-treated" their opponents.

LPR schools were also teaching children "false history" and a "militaristic spirit", Klymenko said, citing reports from civilians who go back and forth there via a crossing point.

"The longer this conflict goes on, the longer it will take to remove its traces on people," he said.

For Thierry Mariani, another pro-Russian French politician who went to DPR via Russia last November, life was "normal" in Donetsk, however.

It has lasted as long as World War One and shows little sign of going away.

"This conflict cannot be resolved by military means, only by diplomacy", Mariupol's Makhsma said.

He was beautifying city parks, among other projects, to make Mariupol "look like West Berlin" in order to attract DPR civilians, Makhsma added, referring to the Cold War-era division of the German capital.

But diplomacy aside, Ukraine has warned NATO that Russia could escalate fighting before Ukrainian presidential elections on 31 March.

Escalation would help pro-Russian candidates in the Ukrainian elections who dangled prospects of peace with Russia, Yehor Bozhok, the head of Ukraine's foreign intelligence service, the SZRU, told EUobserver in an interview in Kiev.

An uptick in fighting could also help pro-Russian candidates in European Parliament elections in May, he added.

"A lot of people in Europe are also tired of having this constant confrontation [with Russia] ... fatigue is an instrument that will be applied in Ukraine and in wider Europe," Bozhok said.

The fatigue tactics were on show in the grey zone.

"When the first casualties started, nobody believed it would last so long," Klymenko, the Luhansk deputy governor, who lost two friends in the conflict, said in Severodonetsk.

"Everybody's pretty tired of this ... people who live along the contact line don't care who's president [of Ukraine], they just want the war to stop," he said.

The 93rd brigade in Avdiivka lost 300 soldiers, the colonel said.

"You're speaking to people who've been fighting since 2014 - what would be your attitude to the Russians if this happened in your country?", he said.

He underlined that his attitude to Russian forces in Ukraine did not extend to Russian people.

The colonel had relatives in Russia, he said.

Kuts, from Donetsk, and Klymenko, from Luhansk, also had family on the other side of the grey line.

"We're not fighting the Russian people and we know that Russian people don't hate Ukrainians ... Do you realise I'm speaking in Russian to you right now?," the colonel said.

"My mum and dad are Russians ... but I'm here doing my job because the enemy is here," he said.