March 16, 2019
AMSTERDAM, Netherlands -- Ukraine and Russia are locked in another heated battle over Crimea. But this dispute is playing out in court, with the two neighbors locked in a legal fight over a precious collection of gold artifacts from the disputed peninsula. 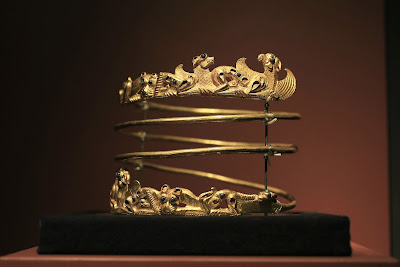 A spiraling torque from the second century A.D., is displayed as part of the exhibit called The Crimea - Gold and Secrets of the Black Sea, at Allard Pierson historical museum in Amsterdam.

It was on loan to a museum in the Dutch capital of Amsterdam in 2014 — around the same time Russia annexed Crimea from Ukraine.

Five years later, the rare archaeological finds are still caught in the middle as both Ukrainian government and Crimean museums claim ownership.

The collection highlights the rich history of Crimea as a staging post at the crossroads between Europe and Asia.

“Never before has Ukraine made so many prized archaeological exhibits available on loan,” the Allard Pierson Museum said ahead of displaying the collection in Amsterdam in 2014.

The exhibition included items originating from four museums in Crimea and one museum in Kiev, Ukraine’s capital.

In August 2014, the museum returned the artifacts it borrowed from the National Museum of History of Ukraine.

However, after facing “conflicting claims” of ownership from both sides, it is still in possession of 572 disputed items.

In 2016, a Dutch court ruled the artifacts must be returned to Ukraine because they are part of the country's heritage, but the Crimean museums appealed the decision.

An appeal hearing took place in an Amsterdam court Monday, where lawyers from both sides presented final arguments.

Marielle Koppenol-Laforce, a Rotterdam-based lawyer who represents the Crimean museums, told NBC News the museums were the original keepers of the historic artifacts at the time of the exhibition in Amsterdam and they still are.

She says the artifacts were recovered from Crimean soil — a result of many years of archaeological work.

“All they want is to display the treasures,” Koppenol-Laforce said.

In a joint statement posted online on the day of the appeal hearing, the four Crimean museums said some of their best artifacts were loaned to the Amsterdam museum under the guarantee of unconditional return.

“We are confident that we have undisputed rights to these exhibits,” their statement said, adding that the case should be stripped of all political interference.

Maarten Sanders, one of the lawyers representing the interests of Ukraine, said the annexation of Crimea has been declared illegal by the United Nations, the European Union and many other international bodies.

“On the basis of international law, the Netherlands and its courts should not recognize the annexation,” Sanders said.

“This implies that any claim for archaeological finds or cultural heritage from Crimea is to be made by its recognized sovereign state, which is Ukraine.”

Sanders, who is based in Amsterdam, said Ukraine is quoting a 1970 convention of the United Nations Educational, Scientific and Cultural Organization to make its case for ownership.

The UNESCO convention deals with illicit import, export and transfer of cultural property.

“For so long as this situation continues the treasures are to be kept in Kiev.”

But for now, the artifacts are in the legal care of the Allard Pierson Museum, which will keep hold of them until all appeals are settled.

In an online statement, the museum said it’s staying out of the legal case as it should not be “the party deciding to whom the disputed objects are returned.”

Despite the original ruling against her clients, Koppenol-Laforce said she remains optimistic about the outcome of the appeal as the Crimean museums have “strong arguments.”

She says a final decision is expected in mid-June, but that date is not set in stone.

Both Koppenol-Laforce and Sanders do agree on one thing:

The case — a legal battle over historical artifacts between two nations that are also embroiled in a territorial dispute — could be precedent-setting.