This Graft Scandal May Be Too Much Even For Ukraine

March 03, 2019
KIEV, Ukraine -- Most Ukrainians are inured to stories of corruption, but a month before the country’s presidential election, a scandal has sparked outrage among even the most jaded. 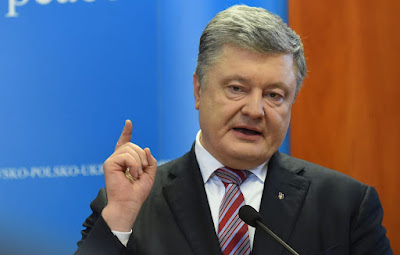 The son of a close business partner of President Petro Poroshenko is accused of selling smuggled Russian components to Ukrainian defense factories at wildly inflated prices.

Poroshenko, who is running for re-election on a nationalist platform, frequently stresses that he has strengthened the military to increase the price Russian President Vladimir Putin would pay for further aggression.

During Poroshenko’s presidency, Ukraine’s defense and security spending has gone up sharply -- to $7.8 billion this year from about $3.3 billion in 2014.

This year, about $630 million of that budget has been earmarked for weapons and military equipment.

Support for the military is akin to a sacred duty for patriotic Ukrainians.

Millions of ordinary citizens have chipped in to help the armed forces meet its needs, often by buying equipment that the government was slow to provide.

Stealing from the war effort is seen as the most egregious crime.

That’s why an investigation led by the prizewinning journalist Denys Bihus that aired on Ukrainian television Monday was such a bombshell.

Citing an archive of documents and private messages from an anonymous leaker, the journalists described fraud by a group that allegedly included Ihor Hladkovsky, the 22-year-old son of Oleh Hladkovsky, a former close business partner of Poroshenko’s who now serves as deputy head of Ukraine’s National Defense and Security Council.

In this capacity, Hladkovsky senior has oversight of the Ukrainian defense industry.

The Ukrainian and Russian defense industries cooperated closely before 2014, when Russia annexed Crimea and backed a rebellion in eastern Ukraine with weapons and troops.

Ukrainian officials have said they’d stopped component imports from Russia since then.

Yet, according to Bihus’s program, Ukrainian factories still needed Russian parts, and the group of young men smuggled them into Ukraine.

Then, they doubled or tripled the asking prices and sold the components, often of poor quality, to factories, paying hefty kickbacks to managers.

The TV program accused the state-owned Ukrainian armaments holding, Ukroboronprom, of complicity in a crime that cost many millions of dollars to the Ukrainian taxpayer.

Even though there’s no suggestion Poroshenko profited personally, his election rivals reacted harshly to the revelations.

Former Prime Minister Yulia Tymoshenko demanded that impeachment procedures be started against the president for treason – a process that would be impossible to finish by election day.

Populist Oleh Lyashko wrote on Facebook that if the allegations are true, Poroshenko should be “shot.”

Volodymyr Zelensky, the comedian and election front-runner, posted an angry Facebook video. “People who came to power on blood are making money off blood,” he said.

Instead, Ukrainians got a series of Poroshenko tweets listing his achievements in strengthening the army and the defense industry and a tweet from the presidential spokesman demanding on behalf of the president that law enforcement agencies look into the Bihus allegations.

Hladkovsky senior also demanded an investigation and announced he was stepping down temporarily from the Defense and Security Council.

Hladkovsky junior said the private messages implicating him were fake and threatened to sue the Bihus program.

Ukroboronprom issued a statement accusing the journalists of manipulating information from an ongoing investigation.

The president’s allies are trying to spin the component-smuggling story as a possible Russian fake.

“Why would Poroshenko, who gave millions to the military in 2014 and 2015, let his friends steal from that same pocket?”

Volodymyr Ariev, a pro-Poroshenko legislator, wrote on Facebook. Poroshenko’s charity foundation reported providing 350 million hryvnias ($12.3 million at the exchange rate for the end of 2016) to the military in 2014 through 2016.

Profits from the smuggling and overpricing operation reached an estimated 250 million hryvnias.

But Ariev’s question would only be valid if Poroshenko himself had been accused of profiting from the scheme.

Instead, he’s accused of tolerating a system of pervasive corruption that helps him consolidate control of the country, much like other post-Soviet authoritarians.

A continued war in the east and high defense spending provide great business opportunities in such a system.

The war doesn’t just get Poroshenko’s government Western diplomatic support and financial aid: It also helps corrupt people on both sides of the border enrich themselves.

That’s a conclusion that Poroshenko, who has made a tough stance against Russia a campaign mainstay, doesn’t want voters to reach.

Both Tymoshenko and Zelensky promise to be more flexible than the incumbent in trying to negotiate peace with Russia, and neither has friends allegedly profiting from the war.

For them, the investigation is a gift; meanwhile, Bihus is promising to reveal another defense industry-related scandal in a week.

The Ukrainian campaign is heating up, and even though he is pulling out all the stops – he has just announced a pension increase starting in March – Poroshenko shouldn’t be expected to cruise to victory.