February 17, 2019
KIEV, Ukraine -- Ukraine has taken the extraordinary step of deporting a senior cleric of the Moscow-aligned Orthodox Church and stripping him of his citizenship, marking a political escalation in the historic rift that has shaken the Eastern Orthodox world and further raised tensions between Kyiv and Moscow. 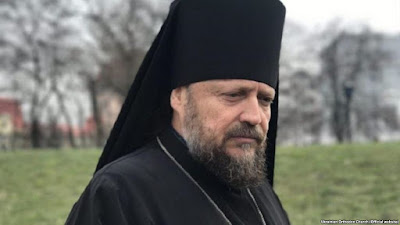 The move threatens to draw U.S. officials into the spat, since the Ukrainian-born Bishop Gedeon, whose given name is Yuriy Kharon, is said to hold U.S. citizenship.

"We have seen reports of a U.S. citizen's departure from Ukraine," U.S. Embassy spokesman Ray Castillo told RFE/RL in an e-mailed response late on February 14.

Gedeon, of the Moscow Patriarchate church in Ukraine, had just touched down at Kiev’s Boryspil Airport after a working trip to the United States when Ukrainian Security Service (SBU) agents detained him over accusations of promoting Russia’s military aggression against the country and holding a second passport, reportedly American.

After being held for hours overnight on February 13 and interrogated, the Ukrainian-born cleric was stripped of his Ukrainian passport and then put on a plane to Frankfurt early on February 14, Ukrainian authorities and Moscow Patriarchate officials said in official statements.

Ukrainian authorities claimed he had lied about losing the passport but then found it on him during the interrogation.

The deportation of a senior member of the Moscow-aligned church in Ukraine is likely to inflame tensions over the simmering religious dispute that has seen the Russian Orthodox Church split from the Ecumenical Patriarchate in Constantinople after it approved the creation of an autocephalous Orthodox Church of Ukraine (OCU).

Ukrainian President Petro Poroshenko, who led the push for a new Ukrainian Orthodox church "independent" of the Russian Orthodox Church and made it a key part of his reelection campaign, has said the move was done in the interest of national security.

The Moscow Patriarchate church, the Russian Orthodox Church's local arm, has been used as a tool by Russian President Vladimir Putin to spread propaganda and foment unrest in Ukraine, Poroshenko and Ukrainian church officials have claimed.

At the same time, Poroshenko and Ukrainian Church officials, including the head of the new Orthodox Church of Ukraine, Metropolitan Epifaniy, have called for restraint amid heightened tensions following the creation of the new church.

After clerics of the Moscow Patriarchate expressed concerns about the loss of church property and complained about pressure from authorities, Poroshenko and Epifaniy stressed there would be no forced takeovers of Moscow Patriarchate properties and no pressure applied to their priests.

However, they have publicly encouraged Moscow Patriarchate priests and parishes to peacefully convert to the Orthodox Church of Ukraine, and Poroshenko signed a law last month allowing for a legal path to do so.

Roughly 300 of some 12,000 Moscow Patriarchate churches have joined the new Ukrainian church since it received independence last month, according to the Religious Information Service of Ukraine. But in at least a dozen cases, the Ukrainian Security Service (SBU) has conducted raids on Moscow Patriarchate churches and properties belonging to its priests on the grounds that they committed acts of "treason" and "incited religious hatred."

Some of those priests have been interrogated, according to Archbishop Kliment, a senior member of the Moscow Patriarchate who resides at the Kiev Pechersk Lavra, one of Ukraine's holiest sites, where mummified monks rest in underground caves.

He told RFE/RL in a recent interview that “Soviet-era tactics” are being used by Ukrainian authorities against his church.

In Bishop Gedeon’s case, upon his arrival in Kiev, SBU agents escorted him to a holding room where they questioned him about remarks he had made regarding Russia’s actions in Ukraine, according to a statement on the Facebook page of the Moscow Patriarchate.

The statement included a photograph of Gedeon standing in front of the entrance to the U.S. House of Representatives meeting rooms, where he had been earlier in the week for meetings.

A separate report shared by Kliment’s office cited the Russian Church as saying Gedeon, who previously lived for years in the United States, was also an American citizen and had sent a request to Secretary of State Mike Pompeo and members of Congress to discuss the church issue in Ukraine.

Ukraine's Interior Ministry shared a video on Twitter showing part of the SBU's interrogation of Gedeon.

It was accompanied by a statement that said Gedeon had been put on a plane to Frankfurt.

Later in the video, the cleric is seen saying goodbye to members of his staff who had accompanied him on his trip while being escorted by Ukrainian border guards onto a plane.

In a post on Facebook, he said his final destination was the United States but did not say which city.

He added that he was "led to the plane by armed gunmen like a criminal!"

In the Interior Ministry video, just before boarding, the bishop turns to the border guards with a final message: "I'll be back."