In War-Torn Ukraine, Women Get Taste Of Combat Training

February 15, 2019
MARIUPOL, Ukraine: In a gym in the Ukrainian port city of Mariupol, not far from the frontline with Russia-backed separatists, 20 women fall to the floor and pull back the rifle bolts of dummy Kalashnikovs. 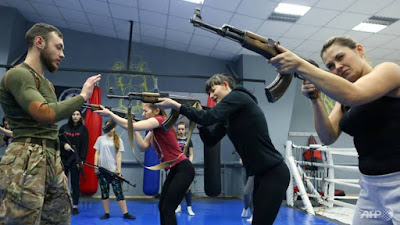 Following the course, which includes learning how to fight with a knife and provide first aid, the women will be taken to a shooting range to hone their shooting skills.

A policeman by day, the 28-year-old who goes by the alias Kazhan ("bat" in Ukrainian) teaches combat training for women on the weekends.

The free courses - dubbed "White angels" - were put together by police officers and former members of a far-right battalion who fought against the separatists in the east of the ex-Soviet country.

"Our country is in a state of open war," Kazhan told AFP in the government-held city around 20km from the frontline.

"The entire population of the country should be ready to fight," he added as his trainees wiped sweat off their faces during a short break.

Fifty women aged 18 to 40 - including a make-up artist, a veterinarian, and a housewife - signed up for the courses which began in December.

The trainees meet twice a week for two-hour sessions in the gym in a Mariupol shopping mall to learn gun handling basics and hand-to-hand combat.

They will also learn how to fight with a knife and provide first aid.

At the end of the course - possibly in spring - the women will be taken to a shooting range to hone their skills.

The organisers also plan to introduce a lecture on Ukraine's modern history.

One of the trainees, Olga Moskovchenko, shows off her trembling hands and a bruise on her shoulder from handling a 3.5kg dummy gun.

"Usually, women don't get automatic rifles just like that," said the 34-year-old mother of three.

"It's hard but very interesting. I'd only seen things like this on television," the blonde woman said with a smile.

"Come Out a Winner"

Another trainee, 18-year-old Valeriya Mazurenko, expressed hope she would be better at self-defence thanks to the course.

"It is not safe in our city," she said. In 2015, Mazurenko fled the rebel stronghold of Donetsk after it came under the separatists' control. Backed by Moscow, separatists have seized control of two eastern Ukrainian regions - Donetsk and Luhansk - in a conflict that has claimed some 13,000 lives since 2014.

Ukraine's armed forces personnel include around 57,000 women, including 26,000 in active military service.

Mazurenko dreamt of joining the Ukrainian army but when she started to collect documents to enlist, she realised she would not be taken seriously.

"I wanted to serve but I am such a petite woman nothing came out of it," said Mazurenko, wearing a white T-shirt with two crossed hammers, the logo of a Donetsk football club, Shakhtar.

Another instructor, 20-year-old Anna Yahmurdzhy, who teaches hand-to-hand combat, said the women were not being prepared "for special forces or the army".

"But we can stand up for ourselves and protect our loved ones," added Yahmurdzhy, who works as a security guard at a nightclub.

In the future the organisers hope to be able to offer nationwide training programmes to get more women to learn self-defence.

"It's a law of nature," said Kazhan, the policeman.

"If you find yourself in a dangerous situation, there are two options: you either become a victim or a winner," he said.

"We intend to come out a winner. And in this war too."