February 21, 2019
BRUSSELS, Belgium -- The EU expresses concern about the ongoing militarisation of the Crimean peninsula and the Black and Azov seas. 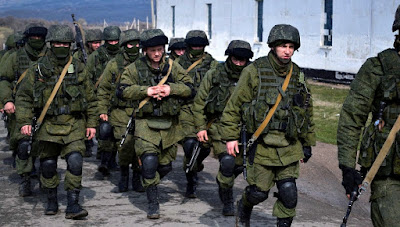 Ambassador João Vale de Almeida, the head of the European Union Delegation to the United Nations, says at the UN General Assembly 67th plenary meeting titled, "The situation in the temporarily occupied territories of Ukraine," that 33 European countries call on all UN member states to consider non-recognition measures.

The European Union recalls its unwavering support to the sovereignty, territorial integrity, unity and independence of Ukraine within its internationally recognised borders.

In line with UN General Assembly resolution no 68/262 (2014) the EU does not recognise and continues to condemn the illegal annexation of the Crimean peninsula by Russia which remains a clear violation of Ukrainian sovereignty and territorial integrity and a direct challenge to international security, with grave implications for the international legal order that protects the unity and sovereignty of all States.

We reconfirm our condemnation of this violation of international law and remain committed to fully implement our non-recognition policy, including through restrictive measures.

We call again on United Nations Member States to consider similar non-recognition measures in line with the UNGA Resolution 68/262, Almeida said in a statement on February 20 on behalf of the European Union and its 28 member states.

The candidate countries, namely the Republic of North Macedonia, Montenegro, and Albania, as well as the Republic of Moldova and Georgia, align themselves with the statement.

The EU expresses concern about the ongoing militarisation of the Crimean peninsula and the Black and Azov seas.

Since the illegal annexation by the Russian Federation, the human rights situation in the Crimean peninsula has severely deteriorated.

Residents of the peninsula face systematic restrictions of fundamental freedoms, such as freedom of expression, religion or belief and association and the right to peaceful assembly.

The rights of the Crimean Tatars have been gravely violated through the shutting down of Crimean Tatar media outlets, the banning of the activities of the Mejlis, their self-governing body, and the persecution of its leaders and members of their community.

Further violating international humanitarian law, hundreds of men from Crimean peninsula have been conscripted into the Russian Armed Forces.

Crimean Tatars, Ukrainians and all ethnic and religious communities in the peninsula must be ensured the possibility to maintain and develop their culture, traditions, education and identity.

"The European Union calls for full compliance with international human rights standards in the peninsula. All pending cases of human rights violations and abuses, such as enforced disappearances, torture and killings should be thoroughly investigated," the statement said.

The European Union calls for the release of the approximately 70 political prisoners being held in Crimean peninsula and Russia, in particular Pavlo Hryb and Edem Berkirov, who both require urgent medical assistance.

The European Union fully supports the work and reports of the OHCHR Human Rights Monitoring Mission in Ukraine and stresses that all international human rights observers and monitoring mechanisms should be granted full, free and unrestricted access to the entire sovereign territory of Ukraine, particularly including Crimean peninsula as laid out in these resolutions 71/205, 72/190 and 73/263 on the "Situation of human rights in the Autonomous Republic of Crimea and the city of Sevastopol (Ukraine)."

The EU calls for full implementation of these resolutions, including the Russian Federation's obligations under applicable international humanitarian law.

The situation in the Azov Sea remains high on our agenda," the statement said.

The EU expressed its utmost concern about the dangerous increase of tensions in the Azov Sea and Kerch Strait and Russia's violations of international law which has led to the seizure of Ukrainian vessels and their crews by Russia and shots being fired at them, wounding several Ukrainian servicemen.

"There is no justification for the use of military force by Russia. Russia's aggressive actions also affect the security situation in the entire Black Sea region," it said.

The EU requests the immediate and unconditional release of all detained Ukrainian servicemen as well as the return of the seized vessels.

The EU also expects Russia to ensure unhindered and free passage through the Kerch strait to and from the Azov Sea, in accordance with international law.

"We will continue to follow closely the situation and we are determined to act appropriately, in close coordination with its international partners. Preparatory work is ongoing to strengthen our support in favour of the affected areas of Ukraine," the statement said.