January 30, 2019
KIEV, Ukraine -- A comedian has taken the lead in Ukraine's presidential race, according to the latest polls. 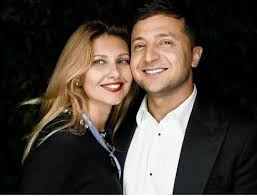 Volodymyr Zelenskiy and his wife Yelena.

A poll by the Razumkov Center and two other organizations shows Volodymyr Zelenskiy, who played the nation's president in a popular TV series, surging ahead of incumbent President Petro Poroshenko and former Prime Minister Yulia Tymoshenko.

Zelenskiy's high rating reflects both his popularity as a TV star and the public disenchantment with current leaders.

Ukraine has faced economic troubles and a sharp drop in living standards after Russia's annexation of Crimea and a separatist insurgency in the east.

The Razumkov survey had 23 percent of respondents supporting Zelenskiy, while Poroshenko and Tymoshenko had 16.4 and 15.7 percent respectively.

The poll of 11,000 was conducted earlier this month and had a margin of error of 0.9 percentage points.

Another survey by the Rating agency also showed Zelenskiy in the lead with 19 percent, followed by Tymoshenko who had 18.2 percent and Poroshenko with 15.1 percent.

Earlier polls had showed Tymoshenko leading and placed Poroshenko in a dead heat with Zelesnkiy ahead of the March 31 presidential vote.

"With voters tired of current politicians and the lack of success in the economy, Zelenskiy could bring a surprise," said Volodymyr Fesenko of the independent Penta analytical center.