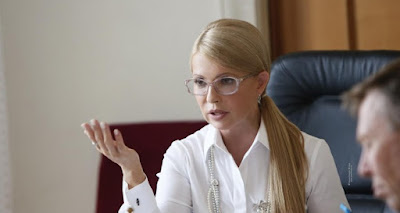 The former energy mogul, who has been in and out of power for almost two decades, sought to portray herself in Washington as a trusted partner against Russian aggression while also casting her previous leadership struggles as part of a concerted smear campaign—revealed in recent months to have been funded by Ms. Tymoshenko’s political enemy and led by Paul Manafort.

Ms. Tymoshenko, in an interview with The Wall Street Journal, said that the revelations President Trump’s former campaign chairman, Paul Manafort, secretly hired a group of former European leaders in 2012 to discredit her in Washingtonshould extinguish any U.S. concerns about her past and urged the U.S. to support her initiative for a diplomatic solution with Russia if she wins the election.

“I believe this is a badge of honor of my job for Ukraine,” she said, referring to efforts to tarnish her reputation.

Concern about Russian hostility toward Ukraine is escalating in the U.S. and the West after a violent confrontation in the Black Sea almost two weeks ago.

Russia seized three Ukrainian naval ships on Nov. 25 close to the Kerch Strait, along with 24 sailors, and has so far ignored international calls for their release.

Moscow also has started to restrict access to the Azov Sea, cutting off major Ukrainian ports.

In her meetings, Ms. Tymoshenko said she had sought to rally support for the U.S. to take concrete action in response to Russia’s aggression in the Kerch Strait and for her initiative to negotiate a new peaceful solution to the conflict.

“In a nutshell, the major step for all of us is to stop aggression,” she said, capping a wish list that included financial sanctions targeting Russian entities, a fast-track to NATO accession and additional military aid.

The U.S. is calling for Moscow to abide by the so-called Minsk agreements, which set the terms of a cease fire and local elections in eastern Ukraine.

Speaking at the Organization for Security and Cooperation in Europe this week, U.S. Assistant Secretary of State Wess Mitchell said Russian aggression toward Ukraine “should concern us all” and vowed to “continue to impose consequences on Russia.”

Ukraine has been fighting Russia-backed separatists in the eastern part of the country since Russia seized Crimea in 2014.

Moscow denies a role in the eastern conflict, saying the separatists are motivated by their own desire for independence.

The State Department said in a statement Friday that Mr. Volker and Ms. Tymoshenko discussed U.S. views on the latest developments in eastern Ukraine and the Black Sea and a peaceful solution for Ukraine.

Mr. Cotton didn’t respond to a request for comment.

Some U.S. officials remain skeptical of Ms. Tymoshenko after her previous stints in government were marred by political infighting and fell short on promised reforms.

Some question her past ties to former Prime Minister Pavlo Lazarenko, who was convicted in the U.S. of money laundering and siphoning off millions of dollars during his time in power.

Ms. Tymoshenko said Mr. Manafort’s actions against her at the behest of former President Viktor Yanukovych was proof that political rivals had worked for years to undermine her.

Starting in 2006, Mr. Yanukovych offered Mr. Manafort millions of dollars to fund a group of former European leaders to sway U.S. opinion in his favor, according to court documents.

In 2011, Mr. Yanukovych imprisoned Ms. Tymoshenko for allegedly exceeding her authority in a 2009 gas deal negotiated with Russia.

Imprisonment tarnished her reputation and relevance at home, but it made her a martyr in some circles in the West.

“Today now it’s open, in published domain, and it’s very clear, how many efforts, financial resources, time, have been spent to discredit and ruin my reputation,” said Ms. Tymoshenko, who wore her hair in the blond braid that made her the face of Ukraine’s 2004 Orange Revolution.

Even, after a 2014 revolution ousted Mr. Yanukovych, it seemed unlikely that Ms. Tymoshenko could make a political comeback.

A crowd of thousands on Kiev’s main square gave her a lukewarm reception when she appeared fresh from her release from jail, and many criticized her as a relic of the kind of politics—based on her forceful personality and backroom deals—that the revolution was supposed to bury.

Petro Poroshenko easily defeated her in a presidential election four years ago, and many longtime allies deserted her political party.

But Mr. Poroshenko has been unable to keep many of his campaign promises, such as ending the conflict with Russia, quashing corruption and forging a strong economy, giving Ms. Tymoshenko an opening to revive her political aspirations.

The clash with Russia near the Kerch Strait places new pressure on the president as he seeks re-election.

Ms. Tymoshenko said she would prioritize reforms and rally international support for her country against Russia.

If Ms. Tymoshenko, 58 years old, wins the March 2019 presidential election, it would be her third time in power after serving two previous stints as prime minister.

Billboards across the country display her pledge to halve the gas price if she is elected, the kind of economic populism that has made Western officials question her governing skills.