Ukraine To Retaliate After Russian Attacks - 'We Have No Alternative'

December 20, 2018
KIEV, Ukraine -- A Ukrainian official has confirmed the country will send warships into the Sea of Azov, igniting another potential clash with Russia. 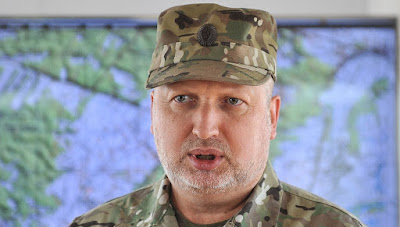 Secretary of the National Security and Defense Council Oleksandr Turchynov told the BBC the move was necessary to prevent Russia from taking full control of the water.

Moscow responded to his comments by saying it was “provocation”.

Mr Turchynov said Ukraine had “no alternative” but did not give any indication when the mission would take place.

He said Ukraine invites representatives of the Organisation for Security and Cooperation in Europe and other international organisations to be onboard their ships during the mission.

The military would also place new missiles onshore capable of taking out distant targets, according to Mr Turchynov.

He then mentioned the bridge linking the area of dispute between the Crimean peninsula and Russia.

The last clash at sea between the two countries was on November 25, when Russia fired on three Ukrainian naval vessels as they were entering the Sea of Azov via the Kerch Strait.

Six crew members were injured in the attack and 24 were detained by Russia.

The Ukrainian military had been struggling to enter ports near the Crimean Peninsula, with Russia claiming the attack on November 25 was because they were provoked.

Ukraine then beefed up its forces on the border with Russia as part of the martial law and barred entry to all Russian males aged between 16-60.

After the attack, the United States flew a military plane over Ukraine in a “extraordinary flight” to show support for the nation.

The flight was conducted as part of the Open Skies Treaty, which allows observation flights to take place after unusual situations with the goal to promote military transparency.

Russian President Vladimir Putin and US President Donald Trump were scheduled to have a meeting before the G20 summit in Argentina, which Mr Trump cancelled following the attacks.

Former US ambassador to Ukraine from 2003-2006 John Herbst said he thought the flight was sensible to respond to Russia’s attack, but more should be done.

In Newsweek Mr Herbst said: “The two steps taken do not necessarily mean that the U.S. will provide new military support to Ukraine. But I believe that over the next two or three months the administration will make some steps to let Moscow know that what it did was dangerous and should not be repeated.”