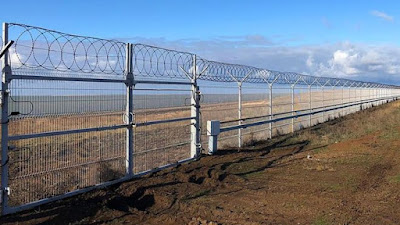 Russia's FSB released this photo of the new border fence in Crimea.

The Border Directorate of the Federal Security Service (FSB) branch in Crimea said on December 28 that construction of the "engineering and technical complexes" -- as it calls the barrier -- is complete.

In a statement reported by Russian news agencies, the Border Directorate said the 60-kilometer-long (37 miles) barrier is equipped with sensors and CCTV cameras.

The purpose of the barrier, begun in 2015, is "to prevent sabotage activities" and "attempts by criminal groups to smuggle weapons, ammunition, tobacco, alcohol, gasoline, drugs" and other items, it said.

Russia moved swiftly to seize control over Crimea after Moscow-friendly Ukrainian President Viktor Yanukovych was pushed from power in Kiev by the pro-European Maidan protest movement in February 2014.

President Vladimir Putin's government sent troops without insignia to the peninsula, seized key buildings, took control of the regional legislature, and staged a referendum denounced as illegitimate by at least 100 countries at the UN.

Russia also fomented unrest and backed opponents of Kiev in eastern Ukraine, where more than 11,000 people have been killed in the ensuing conflict since April 2014.

Since the takeover of Crimea, Russia has beefed up its military presence on the peninsula, already home to the main base of the Russian Black Sea Fleet.

Moscow moved more than a dozen fighter jets to Crimea earlier in the week.

Moscow denies interfering in Ukraine's affairs, but the International Criminal Court ruled in November 2016 that the fighting in eastern Ukraine is "an international armed conflict between Ukraine and the Russian Federation."