December 13, 2018
KIEV, Ukraine -- Russia appears poised to escalate hostilities in Ukraine, according to a new analysis – signs of an uptick in the broader war that the country's top naval officer says is directed exclusively by Russian President Vladimir Putin. 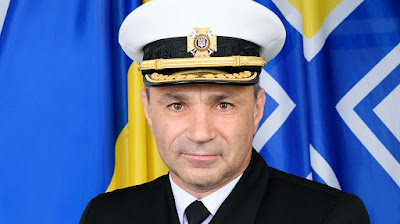 "It is extremely centralized power in Russia. Everything is in the hands of Mr. Putin," Ukrainian Vice Adm. Ihor Voronchenko tells U.S. News.

Twenty-four Ukrainian sailors and seamen on Wednesday remained in Russian custody following a November encounter between the two countries' navies and security forces in the Black Sea.

Russian ships have also blocked access to the Black and Azov seas, limiting Ukraine's ability to use critical commercial ports and raising the specter of war following four years of simmering conflict.

"I can say with 100 percent probability, all command and control in this operation was run from Moscow. Not Rostov, not Crimea. Everything was given instructions by Mr. Putin," Voronchenko says.

Russia's latest activity has followed a monthslong, intense propaganda campaign seeking to spread disinformation about Western activity in Ukraine – home to a U.S.-led military training mission in place since Russia began supporting separatist rebels in the country's east in 2014.

During a meeting last week, NATO members did not agree on a unified response to Russia's latest activities, though the U.S. has begun preparations potentially to sail a naval vessel into the Black Sea in defiance of what it considers Russian aggression.

American aircraft have also stepped up surveillance flights, including at least one through Ukrainian airspace as an affront to Moscow and show of support for Kiev.

"Russia will likely escalate militarily against Ukraine imminently," Catherine Harris and Mason Clark, members of the Institute for the Study of War's research team, wrote in a Tuesday analysis.

"Russia likely perceives the lack of a unified NATO response to Moscow's aggression in the Sea of Azov as an opportunity to escalate against Ukraine and elsewhere in the future," they wrote.

"None of the responses are likely sufficient to deter Putin, whereas the disagreement itself will likely embolden him."

Russia has moved ground units nearer its border with Ukraine in recent days, according to the ISW report, and deployed new ships to the Black Sea under the auspices of preparing for training exercises.

It has also reportedly begun a propaganda campaign designed to alarm the populations in Ukraine about a Western attack.

Voronchenko says Putin appears frustrated and surprised because the Russian leader does not understand why Western countries have responded so intensely to these particular events.

"Now he is extremely nervous, and he's like a rat in the [corner] of a dark room. He doesn't know what to do," the admiral says.

Voronchenko says he has been in email contact with at least one of the detained sailors, who said this week that his morale remains high, though he's tired of listening to the Russian music his captors offer.

One of the captives was reportedly supposed to begin training to command one of two retired U.S. Coast Guard cutters that Ukraine received in September to add to its modest fleet of naval vessels.

Bohdan Nebylytsia was a cadet at the Ukrainian naval academy in Sevastopol, Crimea, when the strategic peninsula was annexed by Russia in 2014 – a move Western countries say was illegal.

He was among those who refused to side with the Russian occupiers, a spokeswoman at the Ukrainian Embassy in Washington, D.C., says, adding that he sang the Ukrainian national anthem at the Russian flag-raising ceremony.