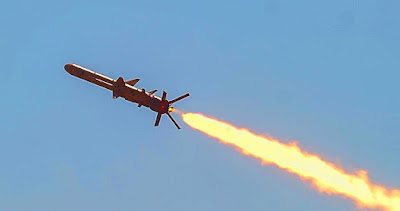 In the south of the Odessa region, the regular stage of tests of the Ukrainian cruise missile took place; Secretary of the National Security and Defense Council of Ukraine Oleksandr Turchynov attended the tests.

“Today, during an important stage of the flight tests, a cruise missile of Ukrainian production has fully completed the planned program”, – Mr. Turchynov said adding that the maritime target was precisely hit at a 100 km distance.

Secretary of the NSDC of Ukraine stressed that missiles of this class are powerful high-precision weapons “capable of destroying any sea and land targets”.

“Ukrainian cruise missiles are capable of providing reliable defense of the Black Sea and Azov coast, affecting enemy vessels at distances up to 300 kilometers, if necessary, even in the ports they are based”, – he noticed.

According to Mr. Turchynov, military and infrastructure facilities, in particular, “strategic bridges and ferry crossings in case of their use by the enemy for aggression against our state” may also be destroyed with the help of cruise missiles.

The Neptun is a subsonic cruise anti-ship missile developed by the Ukrainian State Design Bureau ‘LUCH’ from Kiev.

The new Neptun missile will use inertial guidance with active radar seeker to find its target.

The missile is guided to its target at the final leg of the trajectory by commands fed from the active radar homing head and the radio altimeter.