June 24, 2018
WASHINGTON, DC -- The Embassy of Ukraine in the United States has criticized the world map published by Bloomberg where the Ukrainian peninsula of Crimea, which is now under the temporary Russian occupation, was defined as a neutral territory. 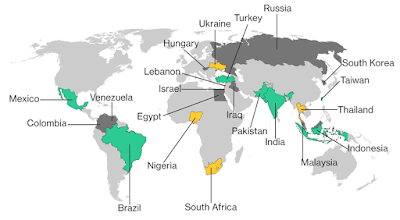 "Journalism should be correct. Bloomberg Business, don’t play into Russian aggressive games and propaganda! Crimea is temporarily under Russia’s occupation, but it is and will be an integral part of Ukraine’s territory Please, correct the map," the embassy wrote on Twitter, asking to mark the peninsula with the same color as mainland Ukraine.

Earlier, Bloomberg illustrated its article "Emerging Markets Now Face a Political Gauntlet: Elections Guide" of June 21, 2018, with a world map where the Crimean peninsula was marked as neutral territory.

Ukrainian Deputy Minister of Information Policy Emine Dzhaparova pointed out the error in her Facebook posting, adding that the ministry was drafting a reaction letter.