Canada Has Warehouses Of Weaponry That Ukraine Needs. Why Aren't We Aiding Our Ally?

June 19, 2018
OTTAWA, Canada -- Canada has always been proud to stand with Ukraine as a friend, partner and ally. For four years now, Ukrainians have been fighting to defend their country from Russia’s illegal military aggression. 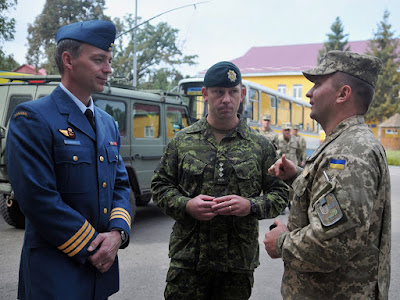 Canadian and Ukrainian servicemen talk during a joint military exercise in Lviv, Ukraine.

But as the war continues, Justin Trudeau is failing to help.

Despite appeals for more support from Ukraine, Trudeau’s government has failed to take any substantive new action.

We have to respond forcefully to make sure Putin gets the message: the world will not tolerate his war-mongering.

Softening our response now will only enable Putin’s aggression.

That is why a Conservative government will take real action to support Ukraine and take a stand against Russia’s illegal aggression.

Justin Trudeau committed to providing $9.5-million worth of military weapons to the Kurdish Peshmerga in their fight against ISIL.

As a result of his failed leadership and ineffective diplomacy, this plan has fallen through, and these weapons are now collecting dust in warehouses in Montreal and Jordan.

Gen. Jonathan Vance, Chief of the Defence Staff for the Canadian Armed Forces, has himself acknowledged the unlikelihood of these arms ever finding their way into Kurdish military service.

Instead of sitting on these weapons, and having them simply take up space in storage facilities, they could be put to use by the Ukrainian Armed Forces, who have repeatedly made requests for these kinds of arms.

This will be a real help to our Ukrainian allies as they fight for their liberty and independence.

Ukraine needs the support of such democratic allies as Canada if it is to repel Russian aggression and free Crimea and Donbass from their occupiers.

Under prime minister Stephen Harper, Canada took a strong, principled position, and directly told Vladimir Putin to get out of Ukraine.

We backed those words with action.

That Justin Trudeau refuses to lead and offer real help to Ukraine is nothing short of shameful.

Ukraine needs the support of such democratic allies as Canada if it is to repel Russian aggression.

Ukraine is a testament to what is achievable through defiance and an undying belief for a better future for their nation.

Throughout a long history of severe foreign oppression, war and deliberate famines, Ukrainians have never lost their vision for a unified and peaceful future for their country.

Andrew Scheer and Canada’s Conservatives will always support the right of Ukrainians to determine their own future in an independent state, safe from foreign aggression.

We will never recognize the illegal annexation of Crimea, and we will always stand with a proud, united and free Ukraine.

I. Nicholas said…
Come on Canada. Stop telling the world how much you love Ukraine and send those weapons, that are accumulating dust, to Ukraine.
5:02 PM