Director Sergei Loznitsa On Russia: ‘It’s Hard To Change The Mentality Of A Nation’

May 09, 2018
KIEV, Ukraine -- The acclaimed Ukrainian director discusses his latest drama "A Gentle Creature", the Ukraine-Russia conflict, and the ‘hell’ of Russian history. 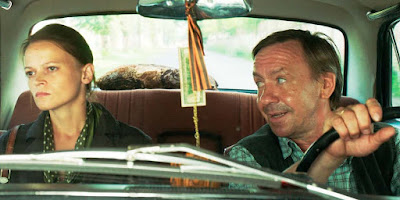 A still from the film "A Gentle Creature".

Sergei Loznitsa is enjoying a rare day off, ahead of the last day of shooting of his new feature, about the war between Ukraine and Russia.

His hotel room in the provincial town of Krivoy Roh is decorated wall to wall with pictures, storylines and notes.

Filming has been a challenge, the Ukrainian director says, not least because of Ukraine’s lousy transport network.

“The roads are very bad. You never understand this when you live in Europe,” he says.

Loznitza hasn’t been to Russia since 2014, just before the momentous events depicted in his epic documentary Maidan.

Months of anti-government protests in Ukraine culminated with security forces opening fire on demonstrators, killing 130 of them.

The country’s then president, Viktor Yanukovych, fled to Russia.

Vladimir Putin responded by annexing Crimea, and kickstarting a bloody conflict in the eastern Donbass region.

The war continues, and has claimed more than 11,000 lives.

“This is most painful. Two similar close people, Slavic people, have been fighting each other for three years. A lot of relationships are broken,” Loznitsa says.

Before his war movie on Ukraine and Russia’s recent past comes the release of Loznitsa’s latest drama, A Gentle Creature, which explores Russia’s bleak present.

The story is simple.

A woman whose husband is in jail for murder receives back from the authorities a package she has sent him.

There is no explanation.

It’s unclear whether something has befallen him, and his fate is never resolved.

The unnamed woman – played with glum radiance by the Russian actor Vasilina Makovtseva – sets off on an odyssey to find him.

She travels to the grim prison town where he is – or perhaps was? – locked up.

Her journey takes her into a world of hopelessness and indifference, populated by predatory cops, local gangsters, petty prison bureaucrats and well-meaning but ineffectual human rights workers.

Her odyssey is by bus, train, Lada taxi and foot.

It is a descent into hell.

As one character she meets puts it: “Man is a wolf to man.”

There is drunkenness, exploitation, casual violence.

Those protagonists not behind bars are in some way prisoners, too.

One conversation goes: “Don’t shout at the woman. She’s upset.”

To which a passerby replies: “We are all upset.”

Is there anything redemptive here?

“That’s a bit like asking Dante if he met someone human in hell, on some level of hell,” Loznitsa replies.

“Yes, they are all human. But they made wrong decisions.”

The cinematography by Oleg Mutu is breathtaking, with luminous sequences showing the woman’s rural village home and the grimy reality of Soviet-era architecture and municipal waiting rooms.

Loznitsa shot the film in 2016 in south-eastern Latvia, in a region close to the Lithuania and Belarus borders and not far from Russia.

It was easier to produce in the European Union than in Siberia, Loznitsa says, where the prison is notionally located.

Loznitsa’s inspiration for A Gentle Creature is a short story of the same name written by Dostoevsky in the mid-1870s.

It features a middle-aged pawnbroker who makes a poor teenage girl his bride, then uses his power to break her spirit and soul.

She ends up killing herself.

As Loznitsa sees it, Russian history is one of “copy paste”.

A system of what he calls “crime brain and crime mentality” is endlessly repeated.

To a large extent, he thinks, Russians collaborate in their own oppression.

He acknowledges that there have been moments where citizens have tried to swap autocracy for democracy – in 1917 and 1991, for example – but says that these attempts at creating another culture all failed.

“It’s very difficult to change the mentality of a whole nation. The big question is how to educate people who don’t want to be educated,” he says.

Meanwhile, Europe’s response to dark events – the seizing of Ukrainian territory, the shooting down of the Malaysia Airlines Boeing 777, flight MH17, the murder of Alexander Litvinenko – has been weak and disappointing.

“We don’t have a politician like Churchill, who takes responsibility and acts. It’s a pity,” he says.

Together with the directors Ken Loach, Mike Leigh and Wim Wenders, Loznitsa condemned the arrest and imprisonment of his fellow Ukrainian director Oleg Sentsov.

In 2015, a Russian court sentenced Sentsov to 20 years in jail, convicting him of plotting terrorist acts in Crimea.

His case has been widely compared to a Stalin-era show trial.

The 11 actors who appear in A Gentle Creature know each other and come from a talented group based at the main theatre in Yekaterinburg in the Urals.

Makovtseva, he says, is a star and famous inside Russia.

“My job on set was easy. I just had to say ‘louder’. It was a great pleasure to work with good actors,” he says.

The film has been screened in Moscow, on a small scale, and got a positive reception. (By contrast, Loznitsa’s Maidan has not yet been shown there.)

Loznitsa’s narrative projects have received critical international acclaim, with A Gentle Creature and his 2012 work In the Fog both nominated for a Palme d’Or at the Cannes film festival.

In the Fog is an existential movie set in the shadows of the second world war.

The Guardian’s Peter Bradshaw described it as “a mysterious, compelling and grim story” about collaboration.

Its central character, a railway worker, is accused, wrongly, of working with the Nazis.

The director’s 2010 Cannes-debuting film My Joy has similar themes to A Gentle Creature and a split present day-wartime arc.

In it, a long-distance lorry driver crisscrosses the former USSR and meets policemen, underage prostitutes and soldiers.

The command “documents” – barked in Russian by a person in state uniform – is inevitably the beginning of something terrible, an unfurling evil that at times can be hard to watch.

The director Andrey Zvyagintsev, by contrast, called My Joy the best Russian-language film of the decade.

Loznitsa characterises Ukraine’s post-Soviet upheavals as a continuing revolt against the neighbouring imperium.

“People don’t want to be in the USSR again,” he says.

Russia’s tragedy, he adds, is that it is doomed to repeat itself.

Loznitsa acknowledges that this same hell feeds his work and imagination.

“Yes, some magic exists in Russia,” he says before heading back to work.

“You could say that hell has its attractions.”

A Gentle Creature is on release.

grycar said…
But Russia has no Nation and I read this
story several times.

the author misrepresents Dostoevsky's intent and
his vision in this story.

The protagonist does rearilze that his actions have been
wrong, in that he marred the young woman to love her and
not abuse her.

This The protagonist now sees lucidly and is a changed man.
He now acts accordingly confusing her completely.

He loves his wife and rushes home to tell her.

However, he is too late and suffers the consequences of his
irresponsibility resulting in his young wife's suffering
confusion and suicide.

he now suffers greatly from the loss and the recognition of his
personally responsible for his wife's death.