May 06, 2018
SEVASTOPOL, Crimes -- A Crimean activist has been sentenced to two years in prison over pro-Ukrainian comments made on social media, a ruling that activists say is unprecedented. 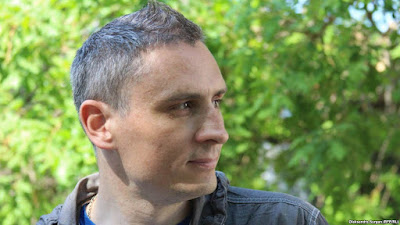 Ihor Movenko was found guilty of extremism by the Russia-controlled court in Sevastopol on May 4.

The charges stem from comments Movenko posted in the "Crimea is Ukraine" group on the social network VKontakte in 2016.

“If I’m not mistaken, this is the first time someone has been imprisoned for comments made on social media,” said Darya Sviridova of the Ukrainian Helsinki Human Rights Union.

"Obviously, a Ukrainian citizen is being persecuted for taking a pro-Ukrainian position on occupied territory," Sviridova added.

A lawyer for Movenko, Oksana Zheleznyak, said the ruling would be appealed.

Movenko was beaten in Sevastopol in September 2016 while riding a bicycle that displayed a sticker with the symbol of the far-right Azoz battalion.

Movenko suffered serious injuries in the attack, but police never investigated the incident.

Following the assault, Movenko was detained in December 2016 by Russia-installed security authorities in Crimea and charged with extremism on social media.

Since Russia’s annexation of Crimea in March 2014, the human rights situation has reportedly deteriorated on the Ukrainian Peninsula.

I. Nicholas said…
This is typical of how the "Evil Empire" treats anyone who does not follow the party line.
2:58 PM

grycar said…
In actuality it is a mini evil empire on its last leg.
7:00 AM