US And EU Expel Scores Of Russian Diplomats Over Skripal Attack

March 27, 2018
LONDON, England -- The US, EU, Canada and Ukraine have ordered the expulsion of dozens of Russian diplomats in response to the nerve agent attack in the UK, in a show of solidarity that represents the biggest concerted blow to Russian intelligence networks in the west since the cold war. 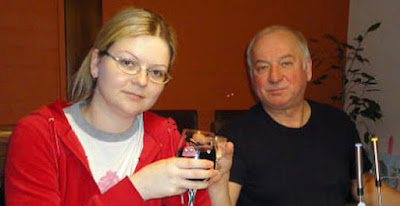 Sergei and Yulia Skripal were poisoned with the Russian nerve agent Novichok in Salisbury.

More than 100 Russian diplomats alleged to be spies in western countries are being told to return to Moscow, in a coordinated response to the use of a chemical weapon in the attempted murder of Sergei Skripal, a former Russian intelligence official, and his daughter, Yulia, in Salisbury on 4 March.

In a sombre statement in the House of Commons, Theresa May welcomed what she said was “the largest collective expulsion of Russian intelligence officers in history”.

“I have found great solidarity from our friends and partners in the EU, North America, NATO and beyond over the past three weeks as we have confronted the aftermath of the Salisbury incident,” the prime minister said.

“And together we have sent a message that we will not tolerate Russia’s continued attempts to flout international law and undermine our values.”

She added: “If the Kremlin’s goal is to divide and intimidate the western alliance, then their efforts have spectacularly backfired.”

The Russian government called the expulsions “a provocative gesture” and said it would retaliate in kind, raising the prospect of further tit-for-tat expulsions, as the US and Europe left the door open for additional measures.

The Kremlin said Vladimir Putin would make the final decision, and the Russian embassy in the US launched a poll on Twitter asking which US consulate in Russia should be closed.

The US has ordered the expulsion of 60 Russian officials who Washington says are spies, including a dozen based at the United Nations, and told Moscow to shut down its consulate in Seattle, which would end Russian diplomatic representation on the west coast.

The EU members Germany, France and Poland are each to expel four Russian diplomats with intelligence agency backgrounds.

Lithuania and the Czech Republic said they would expel three, and Denmark, Italy and the Netherlands two each.

Estonia, Latvia, Croatia, Finland and Romania each expelled one Russian.

Ukraine, which is not an EU member, is to expel 13 Russian diplomats, while Albania, an EU candidate member, ordered the departure of two Russians from the embassy in Tirana. Macedonia, another EU candidate, expelled one Russian official.

Canada announced it was expelling four diplomatic staff serving in Ottawa and Montreal who the Canadian government said were spies.

A pending application from Moscow for three more diplomatic posts in Canada is being denied.

By the close of the day a small “coalition of the unwilling” inside the EU had indicated to the UK Foreign Office that they were not prepared to expel any Russian diplomats in solidarity with the UK.

Belgium and Ireland made no announcements but have indicated action will be taken after cabinet meetings.

The UK expelled 23 Russian diplomats in the wake of the poisoning, and Russia responded by ejecting the same number of British diplomats.

The Russian foreign ministry issued a statement denouncing the expulsions as “an unfriendly step” based on alliances rather than evidence.

“The provocative gesture of the so-called solidarity of these countries with London, which blindly followed the British authorities in the so-called Skripal case and which never got around to sort out the circumstances of the incident, is a continuation of the confrontational policy to escalate the situation,” the statement said.

The UK has refused to provide a sample of the nerve agent to Russia but has supplied one to the Organisation for the Prohibition of Chemical Weapons (OPCW), which is conducting its own investigation.

A senior US official said the expulsions and the Seattle consulate closure were in response to “a reckless attempt by the [Russian] government to murder a British citizen and his daughter with a military-grade nerve agent”.

A second official said the measures were also intended as a response to a “steady drumbeat of destabilising and aggressive actions” by Moscow against the US and its allies.

US officials said the spies at the UN were abusing their residence privileges under the UN headquarters agreement.

They said there were more than 100 Russian spies in the US and the expulsions would significantly reduce Russian espionage capabilities in the country.

The expelled Russians have seven days to leave the country.

Mark Simakovsky, a former Russia desk director at the Pentagon, said the mass expulsions by such a large number of countries acting in concert were unprecedented, but Moscow still had plenty of ways to spy on the west.

“Most Russian intelligence operations are not being done by agents acting under cover of diplomatic protocols,” said Simakovsky, now a senior non-resident fellow at the Atlantic Council.

“Most likely, the poisoning of the Skripals was not done by anyone in an embassy or consulate.”

The White House issued a statement saying the US was acting to “make clear to Russia that its actions have consequences”.

Donald Trump did not comment on Twitter, his usual form of expression on issues he feels strongly about.

While other members of his administration have spoken out strongly against Russia, in particular for its interference in the 2016 US election, Trump has avoided saying or tweeting anything critical of the Kremlin, and last week defied his advisers in congratulating Putin on winning an election generally seen as closed and unfair.

A senior US official said on Monday that the nature of the Russian response to UK allegations had helped convince the administration that the Kremlin was culpable.

“Russia has had nearly a month to respond but instead of explaining has engaged in the usual obfuscation we have seen in the past,” a US official said, noting that Moscow had put out a series of conflicting stories and attempted to put the blame on others, including the US.

EU heads of state concluded last week that it was highly likely the Russian state was responsible for the attack.

The EU is also looking at coordinated steps to rein back Russian hybrid warfare.