Police Injured In Brawls With Protesters Near Ukraine's Parliament

February 27, 2018
KIEV, Ukraine -- Ukrainian authorities say 14 police officers have been injured in scuffles with antigovernment protesters in the capital, Kiev. 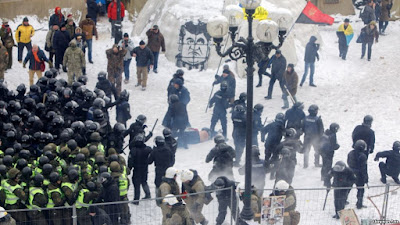 Police clash with supporters of former Georgian President Mikheil Saakashvili in a tent camp in front of the Ukrainian parliament in Kyiv on February 27.

Police said the clashes took place on February 27 after officers prevented demonstrators from setting tires on fire close to the parliament building.

They said the demonstrators then started throwing stones and Molotov cocktails at the police officers.

The city police said an investigation had been launched into the "assault on law enforcement officers."

At the February 27 parliament session, lawmaker Anton Herashchenko called the clashes a "provocation" and accused the opposition New Forces Movement party of organization of the protests.

The party led by the former Georgian president and ex-governor of Ukraine's Odessa region, Mikheil Saakashvili, denied any involvement into the demonstration.

Saakashvili was expelled from Ukraine on February 12 and is currently in the European Union.