January 29, 2018
BRUSSELS, Belgium -- The EU should consider blacklisting more Russian oligarchs in line with a US sanctions review, a senior US diplomat has said. 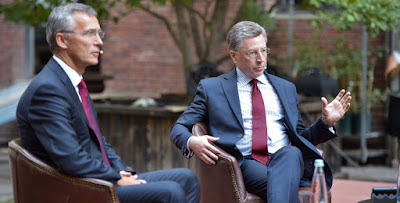 "It's important Russia sees that this isn't a static issue and every one is just moving on. It's a dynamic issue and the costs for Russia will continue to rise if they don't get serious about trying to bring about peace in Ukraine," Kurt Volker, the US envoy on the Ukraine conflict, said.

"Russia is not changing its position at all, which is why we need to be adding to the cost that Russia faces," he said.

"It's important Russia gets the message this [the sanctions] will continue, there's no fracturing here [in the West], and that it will strengthen over time," he added.

Volker spoke to press in the EU capital prior to meeting with his Russian opposite number in Dubai on Friday (26 January).

His mention of "dynamic" sanctions referred to US treasury plans to file a new report on who's who in the Russian elite to Congress on Monday.

The report, part of the Countering America's Adversaries Through Sanctions Act (Caatsa), is meant to prompt debate on which names to add to existing US visa ban and asset freeze lists.

The Caatsa report would be a "lustration" of the "Putin network", a US source said, referring to Russian leader Vladimir Putin.

"For it to be judged a serious effort, it should probably contain well over 100 names," the source said.

"It will increase the risk profile around doing business with these individuals … and might tempt some in the Russian elite to try to put some daylight between themselves and the big boss [Putin]," the source added.

The US has imposed blacklists and economic sanctions on Russia on grounds of its invasion of Ukraine, human rights violations in Russia, and Russia's meddling in US elections.

Caatsa is linked to election meddling, but Volker said it would add to pressure on Russia in Ukraine as part of the wider "mosaic" of measures.

The EU has also imposed blacklists in lock-step with the US over the past three and a half years, but only on grounds of Ukraine.

Its Russia blacklist is due to be rolled over in early March.

It contains 160 names, but only a handful of them, such as Arkady Rotenberg and Konstantin Malofeev, are oligarchs, while most are Russian officials or MPs whose listing put little pressure on the Kremlin.

"A few European governments have … wanted to lift sanctions, but that's not the majority view and they've been rolled over regularly at six-month intervals," Volker said.

"Not only should they be rolled over consistently, but we should be looking closely at their implementation, taking a fresh look at how they apply and who they apply to, and updating [them]", he added.

Volker, a former US ambassador to NATO, is not responsible for coordinating EU-US sanctions on Russia.

That is the job of David Tessler, a state department expert who is little known in Brussels, after US president Donald Trump liquidated a more senior post dealing with the task.

But the two sides still talk despite the downgrade.

The US "consulted extensively" with the EU foreign service on Caatsa implementation last autumn, an EU source said.

The EU foreign service told EUobserver it "has had, and continues to have, regular contacts with the US on all sanctions issues, in the interest of preserving transatlantic unity, [and] maximising the impact of our restrictive measures."

"These contacts have been intensive and have been sustained across different US administrations," it said.

Linas Linkevicius, Lithuania's foreign minister, also said the EU could learn a lesson from Caatsa - that targeting the Russian business elite was an effective measure.

"People are on high alert in Russia, knowing what they are cooking now in the US [the Caatsa report]. It's been received very sensitively, so that means it's working," he told EUobserver in the margins of an EU foreign ministers' meeting in Brussels this week.

"We know it from our sources and from the opposition in Russia, who're saying these kind of individual sanctions are really important," he said.

The US, Canada, the UK, and Estonia also have Magnitsky Acts.

Linkevicius said it would be "very helpful" if there were EU-level Magnitsky sanctions, but he said that was low on the agenda in other EU capitals.

Volker said EU states should also consider sending arms to Ukraine for its "legitimate self-defence" in line with US policy.

"The US has lifted restrictions on the type of assistance we've provided to Ukraine and I think that every country should consider doing that," he said.

He said the US had supplied Ukraine with radar systems to locate Russian artillery and with sniper rifles.

He said supplying anti-tank weapons would deter Russia from expanding the conflict into new territories.

"If they felt they could do what they did with impunity, I think they would," he said.