October 21, 2017
KIEV, Ukraine -- In February 2014, men dressed in camouflage, driving armored trucks and carrying military-issue weapons emerged from the Russian military base in Sevastopol and began streaming across the Ukrainian province of Crimea. 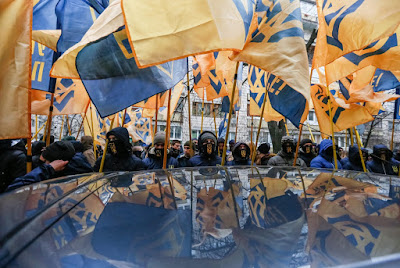 Within hours, they had occupied town halls and television stations.

Within days, they had co-opted local thugs and criminals to create a provisional government.

They held a tightly controlled referendum and announced that residents of the region wanted it to belong to Russia.

While it unfolded, Russian spokesmen, journalists and Internet trolls deliberately cloaked the invasion in a thick cloud of falsehood.

The annexation was described as a revolt against “Nazis” and “fascists” in Kiev who had staged a coup d’etat; in fact, Ukraine’s pro-Russian president had fled the country after ordering his troops to fire at people demonstrating against his increasingly corrupt and authoritarian rule.

A hyper-patriotic victory campaign lauding the acquisition of Krym nash — our Crimea — followed.

Abroad, the push to control Crimea and the rest of eastern Ukraine raised alarms:

This was the first time since 1945 that a European border had been altered by force.

But inside Russia, it was a perfectly sensible course of events, consistent with nearly a century of Ukraine-phobia.

Embedded deep within Russia’s national consciousness is a knowledge of Ukrainians’ thirst for autonomy, awareness of Ukraine’s unpredictability — and an old fear that Ukrainian demands might spread to Russia.

In 2014, Russian officials looked with horror at the young people waving European flags and calling for democracy in Kiev’s Maidan Square and were determined to make sure such a movement would never spread to Russia itself.

A mass anti-corruption protest — particularly one that ends with occupation of the dictator’s palace — is exactly what Russia’s corrupt oligarchs fear most.

Putin himself witnessed exactly that kind of “chaos” as a young KGB officer in Dresden in 1989, when the fall of the Berlin Wall struck him as catastrophic.

He now blames protests against him on “foreign agents” and Hillary Clinton.

But the need to control Ukraine also has important roots in Russia’s historical memory, and the KGB’s.

Turbulence in Ukraine hits panic buttons, because anarchy in the Soviet Union’s agricultural heartland has nearly destabilized Moscow more than once.

Perhaps the best way to explain Putin’s paranoia and covetousness toward Kiev is this: Russia remembers those moments well.

Russian unease about Ukraine goes back to the very beginning of the Soviet Union, in 1917, when the Ukrainians first tried to set up their own state.

During the civil war that followed the revolutions in Moscow and Kiev, Ukrainian peasants — radical, left wing and anti-Bolshevik all at once — rejected the imposition of Soviet rule.

They pushed out the Red Army and for a time had the upper hand.

But in the anarchy that followed the Red Army’s retreat, Polish armies as well as the Czarist White Army reentered Ukraine.

One White general, Anton Denikin, crossed into Russia and came within 200 miles of Moscow, nearly ending the revolution before it really got underway.

The Bolsheviks recovered — but they were stunned.

For years, they spoke obsessively of the “cruel lesson of 1919.”

A decade later, in 1932, Stalin had cause to remember that lesson.

That year, the Soviet Union was once again in turmoil, following his disastrous decision to collectivize agriculture.

“I do not want to accept this plan. I will not complete this grain requisition plan,” an informer reported one saying before he “put his party card on the table and left the room.”

Stalin sent a blistering letter to his colleagues:

“The chief thing now is Ukraine. Things in Ukraine are terrible. . . . If we don’t make an effort now to improve the situation in Ukraine, we may lose” it.

He recalled the Ukrainian national movement, and the Polish and White Army interventions.

It was time, he declared, to make Ukraine a “real fortress of the USSR, into a genuinely exemplary republic.”

To do so, harsher tactics were required:

“Lenin was right in saying that a person who does not have the courage to swim against the current when necessary cannot be a real Bolshevik leader.”

Those harsher tactics included the blacklisting of many Ukrainian towns and villages, which were forbidden from receiving manufactured goods and food.

They also prohibited Ukrainian peasants from leaving the republic and set up roadblocks between villages and cities, preventing internal migration.

Teams of activists arrived in Ukrainian villages and confiscated everything edible, not just wheat but potatoes, beets, squash, beans, peas, farm animals and even pets.

They searched barns and closets, smashed open walls and ovens, looking for food.

The result was a humanitarian catastrophe: At least 5 million people perished of hunger between 1931 and 1934 across the Soviet Union.

Among them were nearly 4 million of 31 million Ukrainians, and they died not because of neglect or crop failure but because their food had been taken.

The overall death rate was 13 percent, but it was as high as 50 percent in some provinces.

Those who survived did so by eating grass and insects, frogs and toads, shoe leather and leaves.

There were incidents of cannibalism, which the police noted, recorded and sent to the authorities in Moscow, who never responded.

(In acknowledgment of its scale, the famine of 1932-33 is known in Ukraine as the Holodomor, a word derived from the Ukrainian for hunger, “holod,” and for extermination, “mor.”)

In the wake of the famine, Stalin launched a new wave of terror.

Ukrainian writers, artists, historians, intellectuals — anyone with a link to the nationalist governments or armies of 1917-1919 — was arrested, sent to the Gulag or executed.

His goal was no mystery:

He wanted to crush the Ukrainian national movement and to ensure that Ukraine would never again rebel against the Soviet state.

He spoke obsessively about loss of control because he knew that another Ukrainian uprising could thwart the Soviet project, not only by depriving the U.S.S.R. of grain but also by robbing it of legitimacy.

Ukraine had been a Russian colony for centuries; the two cultures remained closely intertwined; the languages were closely related.

If Ukraine rejected Soviet ideology and the Soviet system, Stalin feared that rejection could lead to the downfall of the whole Soviet Union.

And if the Ukrainians could establish a more open, more tolerant state, or if they could orient themselves, as so many wanted, toward European culture and values, then why wouldn’t many Russians want the same?

Like Putin many decades later, the Bolsheviks went to great lengths to hide the true nature of their policy in Ukraine.

During the civil war, they disguised their Red Army as a “Soviet Ukrainian liberation movement.”

In the aftermath of the 1932-33 famine, a drastic information blackout was imposed.

The deaths of millions were covered up and denied.

It was impossible to mention the famine in public, on penalty of arrest.

Officials were told to alter the causes of death in public documents.

In 1937, a Soviet census that revealed too many missing people in Ukraine and elsewhere was repressed; the heads of the census bureau were shot.

Foreign journalists were pressured to conceal the famine, and with a few exceptions, most complied.

Of course the parallels are not exact: Putin’s Russia is not Stalin’s Soviet Union.

Still, more than 80 years after the famine and more than two decades after the collapse of the U.S.S.R., the relationship between Russia and Ukraine has come full circle.

Once again, a Russian leader speaks obsessively about the “loss” of Ukraine.

Once again, a regime based in Moscow sees the Ukrainian national movement as an existential, internal threat.

And once again, Moscow has gone to extraordinary lengths to ward off the Ukrainian challenge.

As in 1932, the constant talk of “war” and “enemies” in Ukraine remains useful to Russian leaders who cannot explain stagnant living standards or justify their own privileges, wealth and power.

But history offers hope as well as tragedy.

In the end, the famine failed: Ukraine was not destroyed.

The terrorization of the Ukrainian elite failed, too: The Ukrainian language did not disappear.

The desire for independence persisted, as did the desire for democracy, or a more just society, or a Ukrainian state that truly represented Ukrainians.

When it became possible, Ukrainians expressed these desires.

In 1991, they voted overwhelmingly for independence. Ukraine, as the national anthem proclaims, did not die.

In the end, Stalin failed, too.

A generation of Ukrainian intellectuals and politicians was murdered in the 1930s, but their legacy lived on.

A new generation of Ukrainian intellectuals and activists appeared in the 2000s.

If Putin’s Russia is not Stalin’s Soviet Union, modern Ukraine is not the Soviet Republic of Ukraine, either.

It is a sovereign state, with its own civic leaders and its own politicians, its own media and its own army.

Above all, Ukrainians can now write their own history and decide for themselves if this cycle of violence will finally come to an end.