What Should Putin Do About The War In Ukraine? Learn From Lenin

October 20, 2017
KIEV, Ukraine -- As the centenary of the Russian Revolution comes knocking on the portals of the Kremlin, the Russian government does not know what to do. 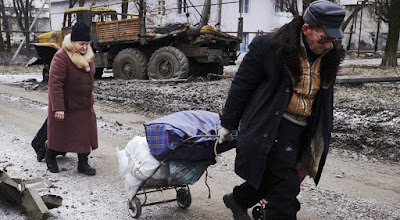 ‘As the war continues, the former lands of Kievan Rus’ are growing further and further apart.’ Civilians flee Uhlehorsk in Ukraine.

The wave of post-Soviet popular revolts, from the Georgian Rose Revolution of 2003 to the Revolution of Dignity in 2014 in Ukraine, made Moscow worry about a possible revolution in Russia itself.

As the young followers of Alexei Navalny, a populist critic of the regime and its corruption, take their protests into the streets of Moscow and other major cities, the Russian authorities are hardly in the mood to celebrate.

While the mausoleum of Vladimir Lenin, the leader of the Russian Revolution, remains in place on Red Square, with plans to bury his body being long shelved, the country’s leadership has found a more appealing hero in Saint Vladimir, the medieval ruler of Kiev, now the capital of Ukraine, where he is known as Volodymyr the Great.

In November last year, on Russia’s National Unity Day, Vladimir Putin presided over the unveiling of an 18-metre monument to the Kievan prince in the very heart of Moscow, across from the Borovitsky Gate of the Kremlin.

Prince Vladimir is depicted with a sword in one hand and a cross in the other.

In his remarks, Putin praised the Christianiser of Kievan Rus – the medieval realm to which Russians, Ukrainians and Belarusians trace their origins – as the “gatherer and protector of Russian lands” whose baptism of the realm made it the “joint spiritual source for the peoples of Russia, Belarus and Ukraine”.

The cornerstone of the monument was brought to Moscow from the recently annexed Crimea, where Prince Vladimir was baptised, according to the Kievan chroniclers.

The monument to the president’s namesake thus also became a symbol of Russia’s claim to parts of Ukraine’s history and territory, as did the blockbuster movie Viking, a film about Prince Vladimir released in 2016 and praised by Putin.

The Russian volunteers who flooded Crimea and then the Donbass region at the peak of the “Russian spring” in 2014 crossed the border into neighbouring Ukraine allegedly in defence of the Russian language, culture and Orthodox belief, against the advance of Ukrainian fascism and corrupt European values.

Some of the key actors of that onslaught, such as the commander of pro-Russian forces in the Donbass, Igor Strelkov (real name: Girkin), and the apostle of the “Crimea is ours” campaign, Natalia Poklonskaya, are now leading the nationalist and Orthodox mobilisation in Russia.

Poklonskaya has emerged as a key figure in protests against the release of the film Matilda, which tells the story of the extramarital affair of the last Russian tsar (and now Orthodox saint) Nicholas II and the Russian ballerina Matilda Kschessinska.

The Ukrainians pulled down all their remaining statues of Lenin in the wake of the 2014 Maidan protests and the Revolution of Dignity.

They did so because they saw in Lenin an important tie not only to Soviet times but also to present-day Russia and wanted to cut it.

But Lenin’s legacy to Ukraine is complex.

He managed to bring Ukraine back into Moscow’s fold after it declared independence in 1918, but the price he paid for doing so seems excessive to present-day Russian opinion makers.

Lenin insisted on keeping the industrial Donbass region in Ukraine, and considered Russians and Ukrainians separate peoples who deserved republics of their own within the Soviet Union.

With Putin asserting repeatedly, during the current Russo-Ukrainian conflict, that Russians and Ukrainians are one and the same people, Lenin’s nationality policies look incongruous.

Lenin as the founding father of the Russian federation, the state now led by Putin, has been disowned as the Kremlin looks to expand the federation’s borders.

While Russia and Ukraine are now in a state of undeclared war, their respective political and intellectual elites seem to be of the same mind about rejecting the communist legacy.

They differ, however, on what to make of the rest of the revolutionary baggage, especially the disintegration of the Russian empire, led by the tsars for two centuries from 1721.

Ukrainian academics have launched a series of conferences to celebrate the national independence attained, albeit briefly, in 1918 as a result of that disintegration.

In the Russian Revolution they see first and foremost a revolution of nations.

While the government in Kiev will not mark next month’s centenary, everyone expects its active participation in the celebration of the centenary of the proclamation of Ukrainian independence in January.

If the Ukrainians are embracing an anti-imperial narrative, in Russia, by contrast, the imperial past is on the march, whether in the growing cult of Nicholas II or the construction of the monument to Saint Vladimir.

The current imperialist vogue is based on the tsarist idea of a big nation in which Russians, Ukrainians (dubbed Little Russians) and Belarusians (White Russians) were considered branches of one Russian people.

By celebrating the centennial of their national revolution, Ukrainians are stressing their difference from the Russians.

These two visions clash today in the fields and mining towns of the Donbass, where, obscured by crises in other parts of the world, the undeclared war goes on, with more than 11,000 people dead on both sides to date.

As the war continues, the former lands of Kievan Rus’, the “lost kingdom” of Saint Vladimir’s times, are growing further and further apart.

The attempt to stop Ukraine’s drift toward Europe, initiated by Putin, served to mobilise Russian nationalism at home and abroad even as it generated anti-Russian sentiment throughout the world.

With nationalism now rising on both sides of the Russo-Ukrainian border, Lenin must be turning in his mausoleum.

He knew back in 1917 that Russians and Ukrainians were separate peoples, and that the only way forward for the revolution was to recognise the difference.

The challenge that Putin and the Russian elites face today is to accept the country’s real independence from its former imperial master.

There can be no lasting peace in the region until that occurs.