October 01, 2017
KIEV, Ukraine -- Ukrainian Prosecutor-General Yuriy Lutsenko said investigators are operating under a theory that saboteurs may have used a detonator to trigger a massive explosion and fire at a munitions depot in central Ukraine this week. 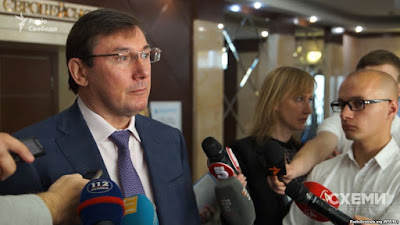 Investigators do not believe, however, that a drone was involved in setting off the explosions in Kalynivka in the Vinnytsya region, Lutsenko told the Inter television channel late on September 29.

"We have no proof that it was an unmanned aerial device in Kalynivka, but we have all the facts of a possibly planted detonator, which likely caused the explosion," he said.

Lutsenko said Ukraine earlier this year detected a drone that investigators believe set off a massive explosion and fire on March 23 at a munitions depot on an army base in Balakliya, near Kharkiv.

"We see all signs of sabotage... We detected an unmanned aerial vehicle's flight across the Russian-Ukrainian border in Balakliya to drop thermobaric charges, which caused the explosions near Balakliya. Therefore, this is an act of sabotage on the part of Russia, which is destroying our military capability," he told Inter TV.

The Balakliya base is near the Russian border and about 100 kilometers from the front lines in the conflict between government forces and Russia-backed separatists further southeast.

Lutsenko told Inter TV that although he believes negligence by Ukrainian security forces guarding the depot in Kalynivka may have contributed to the incident there, "we are inclined to presume that all recent blasts are part of the Russian Federation's warfare."

The explosions and fire in both Kalynivka and Balakliya occurred late at night and thousands of people had to be evacuated from the surrounding areas.

The Kalynivka incident, which began late on September 26, forced the evacuation of more than 30,000 people and resulted in two injuries.

The Balakliya incident resulted in two deaths, including a woman who died at the scene and another victim who died later in the hospital.

Ukrainian authorities said that almost all evacuees in Kalynivka by September 28 had been allowed to return home, despite some continuing explosions of ammunition in the depot warehouses, which authorities said no longer constituted a threat to the population.