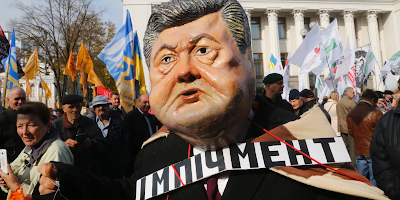 Former Georgian president Mikhail Saakashvili, who leads a Ukrainian opposition party, said at Tuesday's rally in Kiev that Poroshenko was responsible for "poverty and humiliation."

The demonstrators set up tents in front of the parliament building and are vowing to continue protesting until the demands are met.

Saakashvili poses a political challenge to Poroshenko, who appointed him as governor of Ukraine's Odessa region after Saakashvili was termed out of office in Georgia.

They since have had a falling out.