October 10, 2017
KIEV, Ukraine -- A new fighting robot called the Phantom might be deployed on the battlefield in eastern Ukraine next year, according to Defense One. 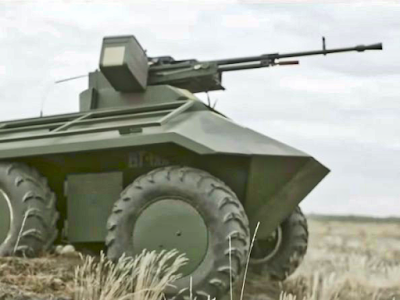 Ukroboronprom, the Ukrainian defense contractor developing the robot, displayed the robot at the Association of the US Army show in Washington DC on Monday, Defense One reported.

The Phantom can be fitted with tracks or wheels, as well as a wide variety of weapons, including a coaxial 23 mm machine gun, antitank missiles, and grenade launchers, according to Ukroboronprom.

It runs on a 30 kilowatt hybrid engine that can hit speeds of up to 37 mph, and it can cover a maximum distance of about 81 miles, Ukroboronprom said.

It is even capable of evacuating wounded soldiers from the field.

The Phantom also has a backup microwave-communication link that allows it to function even if its receiver is jammed or hacked, Defense One reported.

This feature was specifically designed to counter Russian electronic-warfare attacks that have plagued Ukrainian forces, especially in the early days of the war.

The US is developing fighting robots as well, and Russia already "has a wide array of ground bots" but has not deployed them to the Donbass, according to Defense One.

Ukroboronprom is looking to sell the Phantom and form partnerships in general with other nations, especially the US, according to Foreign Policy.

"We came [to the AUSA in DC] to show our expertise and potential — to show that we can be partners," Roksolana Sheiko, director of communications policy for UkrOboronProm, told Foreign Policy.

In recent months, the US and Ukraine have agreed to or discussed a number of weapons-and military-equipment sales and joint ventures.

In June, two deals were made to facilitate sale of military equipment and promote joint research and development between the two countries.

In late July, the Pentagon said it was considering arming Kiev with lethal weapons, including the Javelin antitank missile, to deter Russia.

In late August, Defense Secretary Jim Mattis announced during his visit to Kiev that the US had just approved supplying Ukraine with $175 million in military equipment.

The US, however, is still weighing whether to supply Ukraine with lethal weapons, as some believe it might actually provoke, instead of deter, Russia.