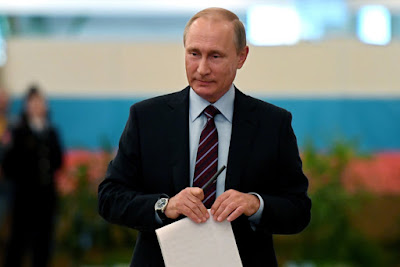 Russian President Vladimir Putin is seen at a polling station during the municipal elections in Moscow, Russia, September 10, 2017.

Putin told German Chancellor Angela Merkel on Monday that UN peacekeepers might be deployed not only on the Donbass contact line separating the sides of the conflict but in other parts where inspectors of the international OSCE monitoring group operate.

Kostiantyn Yeliseyev, foreign policy adviser to Ukrainian President Petro Poroshenko, said Putin's comments were a good sign but "the devil is in the detail.

"In my view, as soon as we deploy UN peacekeeping we can speak about a real positive breakthrough in the field of the political settlement of the situation in Donbass," he said.

"Russia, which is a party to the conflict, must not take part in the future UN peacekeeping operation," he said.

"We believe this UN peacekeeping operation must be deployed along the whole occupied territory of Donbass including the uncontrolled part of the Ukrainian-Russian border."

The conflict between Ukrainian forces and Russian-backed separatists has claimed more than 11,000 lives since it erupted in 2014.

Russia denies Western accusations it fomented the conflict and provided arms and fighters.

Germany and France have tried to persuade both sides to implement a peace deal agreed in Minsk in 2015 but with little success.

German Foreign Minister Sigmar Gabriel said on Monday European sanctions imposed on Russia over its role in the Ukraine crisis should be phased out gradually if an internationally agreed ceasefire deal was implemented.

But Yeliseyev said sanctions should stay in place until the Minsk peace deal is implemented in full.

"That is why we want all German politicians to be vigilant and not to speculate, not to make any kind of irresponsible statements which don't stop the aggression but, on the contrary, will stimulate and motivate the aggressor country," he said.

Turning to Russian war games starting on Thursday in Belarus, the Baltic Sea, western Russia and the Russian exclave of Kaliningrad, Yeliseyev said Ukraine was concerned the exercises could destabilize the region and that Moscow might keep troops and weaponry near Ukraine "for possible future offensive operations".