Ukraine Fears Russia Will Use Exercises Next Week To Invade

September 08, 2017
KIEV, Ukraine -- Ukrainian President Petro Poroshenko says he fears that Russia could use massive military manoeuvres next week as a cover for invasion. 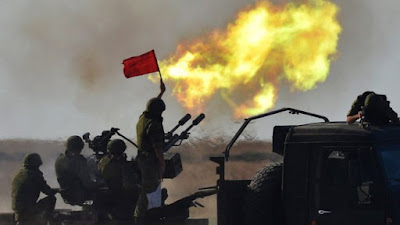 Russian drills in 2015. Some 13,000 Russian troops will take part in exercises in Belarus next week.

Russian-backed rebels have carved out a swathe of territory in eastern Ukraine.

The Kiev government accuses Russia of supplying regular troops and sophisticated heavy weaponry to the rebels.

Moscow denies any direct involvement, while admitting that Russian "volunteers" are helping the rebels.

"There are no signs that Moscow is ready to pull out of Donbass or Crimea," Mr Poroshenko said in his state-of-the-nation address.

"But unfortunately there is more and more proof of its preparations for an offensive war on a continental scale."

Special forces in unmarked camouflage seized key installations, and only much later did President Vladimir Putin admit that it was a Russian state operation.

Mr Poroshenko said the Zapad-2017 drill "was the main reason for beefing up security on all stretches of our state border".

There is speculation that Russia may deploy many more troops than the 13,000 its defence ministry has mentioned.

"Seven thousand flatcars with troops and hardware have approached the territory of Ukraine, and unfortunately there are no guarantees that after the drill is over they will all return home from Belarus," Mr Poroshenko said.

Russian security troops deployed during the Sochi Olympics in 2014 had gone into Crimea, he said.

And Russian military units involved in a drill in the Caucasus in 2008 were later involved in the war against Georgia.

Turning to the shaky ceasefire in eastern Ukraine, he rejected Putin's call for a peacekeeping mission to be deployed along the line of contact, between the Ukrainian army and the separatists.

Instead, he insisted, UN peacekeepers should be deployed across the entire rebel-controlled area, including the border with Russia.

And he ruled out any role for the Russian military in such a force.