September 08, 2017
KIEV, Ukraine -- No, Vladimir Putin has not suddenly become a man of peace. His recent overture in Ukraine should be seen for what it is -- an effort to further his own interests -- and treated as such. 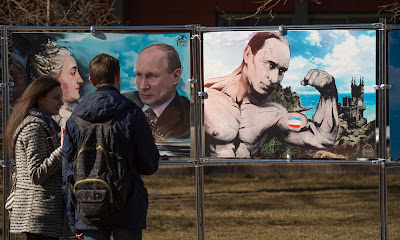 After the Russian president called for bringing United Nations peacekeepers into the Ukraine conflict, Germany's foreign minister said he was "very glad" about the "surprising" development from a Kremlin that had previously shunned calls for an international force.

Nobody who knows Putin well should be so gullible.

While the Ukrainian government and its Western supporters have also called for the UN to monitor the civil war in Eastern Ukraine, they have rightly insisted that the peacekeepers monitor the border with Russia, where arms and advisers pour in to aid the separatist rebels aiming to split the nation further apart.

Yet Putin wants the international force to patrol only the unofficial dividing line between the breakaway regions and the Ukrainian military.

His goal, clearly, is to have the UN forces establish a de facto independent state for the Russia-aligned forces.

This Ukraine strategy -- including the annexation of Crimea through an illegal referendum in 2014 -- is of a piece with Putin's long-term goal of creating a series of "frozen conflicts" around Russia's borders to serve as a buffer zone between his nation and what he sees as a hostile West.

Others involve the breakaway Transnistria region in Moldova as well as Abkhazia and South Ossetia in the Caucasus, which have been under the Kremlin's thumb since the brief border war between Russia and Georgia in 2008.

The West should see Putin's latest offer in Ukraine for what it is: a Trojan horse to solidify the pro-Russian rebels' hold on Eastern Ukraine.

If there are to be talks about UN peacekeepers, they must begin with an understanding that they will patrol the Ukraine-Russia border and interdict all military aid flowing to the breakaway regions.

The U.S. and its allies should also consider measures that might give Ukraine greater leverage in talks to restore its full sovereignty, including shipping so-called lethal defensive weapons such as Javelin anti-tank missiles.

They should also be straightforward with the Ukrainian government that it will never unify the nation without a serious effort to eliminate corruption and to punish those on the nationalist side who have committed war crimes in the civil conflict.

Yes, Ukraine conflict has cooled and slipped off the headlines, but that's not really an improvement:

It's exactly what Putin wants.