Putin Warns U.S. Not To Supply Ukraine With Defensive Weapons

September 05, 2017
XIAMEN, China -- Russian President Vladimir Putin said on Tuesday that any decision by the United States to supply defensive weapons to Ukraine would fuel the conflict in eastern Ukraine and possibly prompt pro-Russian separatists to expand their campaign there. 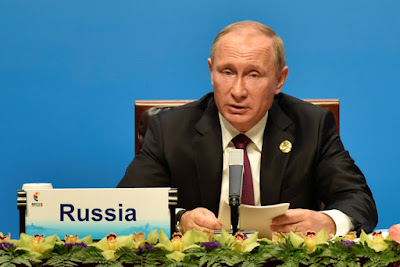 Russian President Vladimir Putin delivers the speech ahead of the signing ceremony of BRICS Business Council at 2017 BRICS Summit in Xiamen, Fujian province in China, September 4, 2017.

On a visit to Kiev last month, U.S. Defense Secretary Jim Mattis said he was actively reviewing sending lethal weapons to Ukraine to help it defend itself, an option that previous U.S. president Barack Obama vetoed.

Ukraine and Russia are at loggerheads over a war in eastern Ukraine between pro-Russian separatists and Ukrainian government forces that has killed more than 10,000 people in three years.

Kiev accuses Moscow of sending troops and heavy weapons to the region, which Russia denies.

Putin, answering a question after a BRICS summit in China about the possibility of the United States supplying Ukraine with heavy weapons, said it was for Washington to decide whom it sold or gave weapons to, but he warned against the move, something Kiev wants.

"The delivery of weapons to a conflict zone doesn't help peacekeeping efforts, but only worsens the situation," Putin told a news briefing.

"Such a decision would not change the situation but the number of casualties could increase."

In comments likely to be interpreted as a veiled threat, Putin suggested that pro-Russian separatists were likely to respond by expanding their own campaign.

"The self-declared (pro-Russian) republics (in eastern Ukraine) have enough weapons, including ones captured from the other side" said Putin.

"It's hard to imagine how the self-declared republics would respond. Perhaps they would deploy weapons to other conflict zones."

Putin also said Russia intended to draft a resolution for consideration in the United Nations Security Council, suggesting armed U.N. peacekeepers be deployed to eastern Ukraine to help protect ceasefire monitors from the Organization for Security and Cooperation in Europe (OSCE) there.

"It would help resolve the problem in eastern Ukraine," said Putin, saying that a slew of preconditions would need to be met before any such deployment happened.