September 12, 2017
AVDIIVKA, UKRAINE -- Russia has suggested UN comes to front line once both sides have retreated - but Ukrainian soldiers do not trust the proposal and are preparing for fresh battles to come. 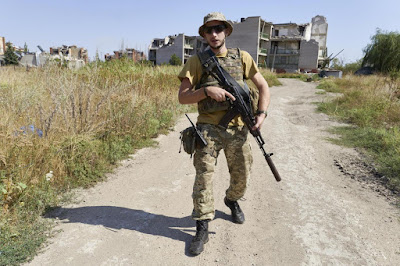 A Ukrainian soldier in the village of Shyrokyne, within the war zone, on Saturday: troops are currently preparing for fresh battles.

A cool wind blows across the steppe and through a sprawling, industrial district at the heart of Ukraine’s war zone.

After a new truce that few believe can hold, the only sound now in this concrete wasteland is the creak of twisted, rusting sheets of metal.

They hang from warehouses sprayed with thousands of bullet holes, surrounded by bomb craters and woodland shredded by machine guns.

Platoons camp out in derelict warehouses on either side of the front line, waiting for this eerie silence to end while finding some comfort in their adopted pets, abandoned by long-absent owners.

A little grave lies beside the concrete shell of one gutted factory; a can of dog food is placed in the earth beneath a wooden sign: “Gerda 29.07.2017”.

Just south of the government-controlled town of Avdiivka, this ravaged, near-apocalyptic setting known as the Prom Zone – repeatedly bombarded by rockets and heavy artillery – could be a prime destination for UN peacekeepers if new proposals from Moscow are accepted.

He also suggested a lightly-armed peacekeeping mission be deployed along the front line to help protect ceasefire monitors in eastern Ukraine, where a smouldering conflict has claimed more than 11,000 lives since 2014.

Germany cautiously welcomed the proposition, which could lead to Blue Helmets operating in the EU’s back yard.

“The offer shows that Russia has undergone a change in its policies that we should not gamble away,” says Sigmar Gabriel, the German foreign minister.

Others closer to the fighting are less enthused.

Frontline troops have poured scorn on Putin’s plan as the warring parties use the latest truce to regroup, reinforce positions and prepare for another round of fighting.

Many regard the proposals to post peacekeepers along the front line – rather than the Russia-Ukraine border – as a blatant ruse to improve Moscow’s hand at negotiations, to cement the separatists’ control of breakaway territory and to allow the continued flow of weapons and fighters across the international frontier if needed.

Likewise, such a UN mission could help freeze this deadlocked conflict, allowing Russia to wind down its clandestine-yet-costly involvement without losing face.

“We cannot accept peacekeepers being anywhere but on the border with Russia,” says Nikolai Cherkov, 43, a Ukrainian government soldier based at the exposed “Shield” position, approximately 00m from positions of Moscow-backed forces.

Russia’s caveated draft proposals demand peacekeepers only be deployed once both sides have pulled back, with heavy weapons withdrawn.

“If we move away, we cannot control the town. There is no trust. The separatists would move against us.”

The latest truce, which marked the start of the new school year, has led to a dip in fighting, offering the war-weary civilian population some respite.

However, the lull is simply being exploited by frontline soldiers to fortify existing positions and create new foxholes and firing outposts for when the relative calm inevitably subsides.

“We use the ceasefire to improve our positions,” says Anatoliy Stelmakh, a lieutenant-colonel.

“We are expecting new battles ahead.”

This impassive, body-builder type says he has served in two UN peacekeeping missions in the Democratic Republic of the Congo, and is among a minority of Ukrainian soldiers who backed Putin’s proposals.

“Placing peacekeepers on the contact line will create a ‘green zone’ between the two sides. All wars begin and finish in the political sphere. When there’s real quiet, without any military activity, then sensible political decisions can be made. Peace must be made step by step, it is a slow process. Above all else, this is a war for the mind.”

“The war will end when I can go home. Peacekeepers must be on the border to stop the supply convoys of weapons.”

Vladislav, 27, based further down the line, sums up the general, dismissive attitude:

“We can’t trust an enemy who brought us war now to bring us peace.”

There is a small cluster of cottages beneath the Prom Zone.

They are among six relatives living in this single-storey house in the shadow of no-man’s land.

The detached, chess-like tactics of Russia and the West have little meaning for them.

“I don’t know if peacekeepers will make life here any better – such things are beyond me,” says Natasha, a mother in her mid-20s.

“They certainly couldn’t make our situation any worse.”

Inside, her young daughter lies on a grey, UN-donated blanket beneath a large, colourful number “6” mounted on the wall for her recent birthday.

Vacant and unresponsive, with dark rings under her eyes, this haunted little girl spends the afternoon watching cartoons alone.

“Arina cries a lot – she is very scared,” her mother tells me.

“Most of her friends have fled. She will never be accustomed to the fighting. We can’t turn it into a game for her. Every time the shooting starts, it terrifies her.“

Despite the danger, fear and deprivation, there is great resilience in this beleaguered community.

“Money is tight but we survive off the land and eat whatever nature provides,” says Lyudmila while dishing out bowls of freshly-made borsch (three years of armed conflict has done little to dent a deep tradition of hospitality).

“Occasionally we get aid but it’s our garden that keeps us going. We face this war as a community. We help each other and knock on each other’s doors to check everyone’s OK. We share what food and water we have. Each of us has to rely on our neighbours – there’s no one else.“

A few doors down, Olga Mandur shovels coal into buckets in preparation for the winter months.

This sprightly, retired coke plant worker in her 60s nods at her garden, which blooms with tulips and roses, just a few hundred metres from the front.

”They are more important than ever during war.”

She is joined by Anya Fendeyeva, a widow and great-grandmother in her mid-70s who survives off a pension that equates to £2.60 ($3.43) per day.

An exploding artillery shell destroyed her kitchen and bathroom earlier this year, denying this elderly woman a working toilet.

Amid the devastation, though, her garden remains relatively abundant: apples and plums, cabbage, peppers and potatoes, plus fresh eggs from her brood of hens.

“My grandchildren and great-grandchildren never come here, it’s too dangerous. But my neighbours look out for me – we’re very close and share our food and water. Everything we have is a gift from God so it’s not mine to keep.”

A little way up from her cottage, past bombed-out homes and an abandoned house commandeered by a nationalist militia, some soldiers have built a macabre memorial.

On the ground, spent shell casings, shattered mortar rounds and jagged shrapnel are cemented beneath a three-metre-high metal crucifix.

This monument to the fallen is wrapped in barbed wire that holds a picture of the Virgin Mary.

The torched remnants of a tank’s gun turret are placed nearby.

If Putin’s controversial proposals get passed, Blue Helmets could be among those who pass this sombre shrine to patrol the front.

Yet there are some who still think there is a simpler path to peace.

At the foot of the cross, among the spent weaponry, some unknown pilgrim has placed a laminated message:

“We can stop the war with prayer and fasting.”